48 places to stay
Sort by:
Relevance

Edinburgh continues to be a state-of-the-art study locale with more than 40,000 students opting for the city from all over the globe. Entrenched in a rich history spanning centuries, it houses among the best universities in the world. A comfortable and safe study destination, it is easy to come across convenient student accommodation in Edinburgh. From world-class sports centres to popular galleries and museums, there is something for everyone in Edinburgh.

Universities in Edinburgh provide exceptional life experiences both, inside and outside university classrooms. It boasts an array of programs and courses which equips students with valuable life skills and forge a strong path for themselves. To top it all off, Edinburgh has bagged 12 Best City Awards in recent years and has been named the Best Urban Destination in the UK in the Conde Nast Traveller’s Reader’s Choice Awards (2020).

The city is home to a vibrant culture, beautiful scenery and a bustling city centre which becomes an ideal home away from home for students in Edinburgh. Quality student flats in Edinburgh are scattered around the city because it houses thousands of students coming from various parts of the world to pursue world-class education. Life in Edinburgh is easy to navigate due to cheap and safe travel and strategically located student halls in Edinburgh make university, daily amenities and social activities easily accessible. 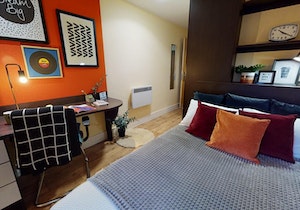 Stylish apartment at the edge of Meadows Park - EDB-871295

At first, it may appear that finding suitable student accommodation in Edinburgh is a difficult task, but it is not. Most of student housing in Edinburgh is near prestigious universities such as the University of Edinburgh, Edinburgh Napier University, and others. Whether you're looking for upmarket premium housing or studio flats, Edinburgh has it all. You have the option of staying in university halls of residence or in private apartments in Edinburgh.

While on-campus housing may appear to be more convenient due to its closeness to the institution, off-campus housing is less expensive and more student-friendly, since you have the freedom to choose your room type and the facilities and services supplied. UniAcco has some of the best student flats in Edinburgh, with the bulk of them being within walking distance of the universities and offering excellent facilities.

As a student, Edinburgh is one of the nicest and most fascinating locations to live in. Festival Fringe, the world's largest arts festival, takes place in Edinburgh every August. The 2019 festival sold a total of 856,541 tickets and held 3,841 events in 323 locations, setting a new record. As a result, Edinburgh has been called the "World's Number One Festival City." This lovely city is also home to two UNESCO World Heritage Sites: the jumbled mediaeval Old Town and the well-planned Georgian New Town.

Edinburgh has a reputation for being one of Europe's most intriguing towns. Its dark, ancient walls conceal a plethora of mysteries, the most of which we are likely unaware of. Did you know that Edinburgh Castle is constructed on the ruins of an extinct volcano? Or that Edinburgh has most listed buildings of any city in the world? These figures probably don't matter much to a student, but what if I told you that student accommodation in Edinburgh is far less expensive than in any other major student city?

When you relocate to a new place and begin university, you must determine where you will reside. You have the option of applying for housing with UniAcco. There are a plethora of student housing in Edinburgh options available to a wide selection of first-rate student housing, dining options, and Residence Life assistance. If you do not reside far from Edinburgh, you have the option of moving into private accommodation (whether rented or acquired) or staying in your present living arrangement.

Cost Of Living In Edinburgh

The cost of living in Scotland’s capital is quite high. It may not be as expensive as its other British compatriot, London but still expensive enough for your average student. The average monthly expenditure of a student is as follows (subject to lifestyle)

It is advisable to have a monthly budget of around £2,600 to live comfortably in Edinburgh, if you choose to stay in private student accommodation in Edinburgh.

The New Town's main street is bustling Princes Street. It stretches for about a mile and is bordered with colourful gardens and exquisite shops, including Jenners of Edinburgh, one of the world's oldest department stores, which was founded in 1838.

Lothian and First are the two most major bus companies in Edinburgh, with routes running through the core of the city. The bus stops are used by both companies, but the bus numbers are different and each company has its own ticket.

York Place and Edinburgh Airport are connected by a single tram line in Edinburgh. There are 15 stations along the route, all of which are wheelchair accessible. The Edinburgh tram is only helpful for getting to and from the airport for visitors. Walking or taking the bus are the best ways to move about the city centre. From Edinburgh Airport, it takes 35 minutes to travel to Princes Street (the nearest station to the city centre).

Edinburgh Castle, Scotland's most recognisable landmark, is one of the most popular tourist destinations in the United Kingdom. The famous One O'clock Salute from Half Moon Battery (cannon fire commemorates the tradition of ships synchronising their clocks), the remarkable Scottish National War Memorial and National War Museum, and the breathtaking selection of Crown Jewels housed in the Royal Palace are all standouts of a tour.

The streets that interconnect Edinburgh Castle with the Palace of Holyroodhouse are called the Royal Mile. This magnificent boulevard, lined with gorgeous mansions, churches, and ancient buildings, is a terrific spot to wander for its stores (including kiltmakers), inns, museums, cafés, and restaurants.

Moving away to university and finding a place to live may be a stressful experience. It makes no difference if you're relocating an hour away or studying in a different nation. Fortunately, individuals studying in Edinburgh have a variety of fantastic neighbourhoods to choose from while looking for a place to live. There are many student accommodations in Edinburgh especially near some of the famous universities such as The University of Edinburgh, Edinburgh Napier University, Heriot-Watt University and Queen Margaret University just to name a few.

Regardless of the reason you are considering living in Edinburgh, the city is sure to have the perfect home for you. The city is bursting with great homes suited to all. The county town is full of fantastic areas! However, on-campus accommodation in Edinburgh is comparatively a little higher than off campus accommodation. With UniAcco there’s absolutely no need to worry. UniAcco offers the best student accommodation in Edinburgh and it assures that this city will have a place for you round the year. Here are a few properties listed on UniAcco.

Shorthope Street offers affordable student housing in Edinburgh that is highly affordable. The apartment has facilities such as double beds, fridge and sofa and is perfect for students that have their own private space.

Panmure Court student accommodation in Edinburgh offers studio rooms, the studios can host dual occupancy at no extra cost. A laundry room, a Wi-Fi connection, a bed and 24/7 on-site staff. It has ANUK and National Code.

Lady Nicolson Court student accommodation in Edinburgh, is a 5-minute walk to the University of Edinburgh and a 12-minute walk from Edinburgh College of Art. It offers studio rooms, the studios can host dual occupancy at no extra cost. A Wi-Fi connection, a bed and 24/7 on-site staff. It has ANUK and National Code.

Stylish apartment at the edge of Meadows Park - EDB-871295