11 places to stay
Sort by:
Relevance

Chester is a student city full of charm, character, and unique experiences. In this city, you can anticipate top quality in your education as well as your lifestyle. This city has a population of about 1,00,000 people, with 15,000 of them being students. Within walking distance of the city, you can find the best of everything. The city is ranked first in terms of safety and third in terms of student nightlife.

The city has only one institution, the University of Chester, which has been in operation since 1839. It provides a wide range of MA and PhD programmes, and the city itself is extremely friendly with classic student houses in Chester available for students. Owing to the growing student population, the city has a decent supply of housing. Private student accommodation in Chester offers a wide range of options, from ordinary ensuite rooms to bigger studio apartments with a variety of attractive amenities.

The city encompasses a wide rural territory that stretches far outside the Chester urban area, near the Welsh border. It boasts an extensive bus network that allows you to go around town fast and affordably. The rail station, which is only a twenty-minute walk from the main university field as well as student flats in Chester, connects you to all of the area's major cities, as well as the Urban Centre and Manchester. 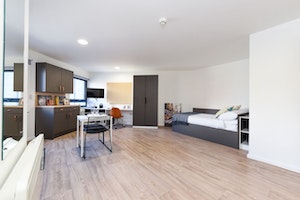 Chester is a dynamic city known for its student population. With bustling bars, night pubs, and private clubs, there's a night scene to fit every mood. With students accounting for a substantial section of the population, the city has a solid Chester accommodation. Students can choose from a variety of student houses in chester, ranging from ordinary en-suite rooms to bigger studio apartments with a variety of appealing facilities. There are a variety of different housing choices available in addition to the Chester uni accommodation. Shared student accommodation in Chester is popular amongst the university students who wish to move out of halls and are especially popular among groups of four or more friends.

Chester, the capital and largest city of Wales, is located on the country's south coast. Chester is home to some of the best higher education institutions in the country, including Chester University, Chester Metropolitan University, and others. As a result, student accommodation in Chester has witnessed a vast expansion in recent years. Many international students come to the city to pursue higher education. The famous University of Chester alone enrols around 15,000 students each year. The city is known for its Roman heritage as well as being a desirable and inviting student location.

Best Places To Stay In Chester

Chester, an ancient, walled city, is an excellent place to study. Chester boasts a lot of student housing within walking distance of the city centre, so it's not a long walk to all of the stores and clubs that Chester has to offer. Chester City Centre, Boughton, Hoole, Newton, Parkgate Road, and others are among the most popular student areas in the city, with a high share of international students. At UniAcco, you can find student accommodation in Chester in the aforementioned places and beyond. We have listed a few of them below for your reference -

Cost Of Living In Chester

The actual cost of living in Chester varies considerably! It is determined by a variety of factors, including the type of student accommodation in Chester, spending patterns, and lifestyle. When compared to other regions of the UK, the cost of living in Chester is quite low. The cost of studying in the UK (for one academic year) is now fixed at £9,135 for any university outside of London, according to UK Visas and Immigration standards. If you opt to study in Chester, you must be able to demonstrate that you have adequate means to cover tuition fees for your first academic year as well as living costs of £9,135 to get a Tier 4 student visa.

On average, student housing costs at Chester provided by UniAcco lie within the range of £94 to £215 per week and this depends on the accommodation type, location, amenities, facilities, and more.

Chester has an extensive bus network that allows you to get around town swiftly and affordably. The rail station, which is only a twenty-minute walk from the main university field, connects you to all of the region's major cities, as well as the Urban Centre and Manchester. If you book your student accommodation in Chester within the vicinity of the rail station, it’d be a major plus for you in terms of transport. The fast trains that visit the capital may bring you there in around two and a half hours. Fares are reasonably priced, but keep in mind that a student railcard will save you much more money. In addition, cyclists or bikers will find the town to be quite hospitable.

Chester is without a doubt one of the top-rated English cities, with a fantastic history, amazing places to explore, interesting sights, and fun-filled pubs! Here are the greatest attractions, places to see, and things to do in Chester, UK, if you're planning a day trip around this historic Roman town!

Chester's City Walls, primarily made of red sandstone, follow the even earlier Roman walls, save where they extend to the river and encompass Chester Castle. The entire circuit, which is the finest preserved of its sort in the UK, is a roughly two-mile walk that includes the four main gates: Northgate, Eastgate, Bridgegate, and Watergate.

Chester Cathedral is on the site of a much ancient church dating from AD 958, as well as a later Benedictine abbey (part of the old Norman church survives in the north transept). When Henry VIII established a new diocese following the Dissolution in 1541, the monastery became a cathedral.

Chester Roman Amphitheatre, the largest such site in Britain and one of the best free things to do in the city, is still being excavated and discovered. Excavations in 2005 uncovered two subsequent stone-built amphitheatres with wooden seats, one of which resembled the Pompeii amphitheatre.
Dewa Roman Experience

The Dewa Roman Experience is an enthralling interactive recreation of life within the 2,000-year-old Roman castle buried under modern-day Chester.