76 places to stay
Sort by:
Relevance

Liverpool, with a student population of almost 70,000, is by far one of the most popular student cities in the UK. Liverpool is known for its low cost of living, housing, and entertainment, and it has a thriving student scene. It's an iconic city with many famous landmarks, such as The Liver Buildings, The Beatles' houses, and the historical docks - all of which will become familiar sights when you choose to study there. Finding student flats in Liverpool or student housing in Liverpool located within the vicinity of these universities as well as the major attractions is a simple and hassle-free process.

Affordability is a significant consideration while selecting a student city. In general, the city has a low cost of living and a low cost of student houses Liverpool. Liverpool is such a tiny yet densely packed city that no matter what way you turn, you'll feel like you're rubbing elbows with cultural institutions. If you're a culture vulture in need of a daily dose of art, Liverpool is the place to be. The nightlife in Liverpool is concentrated in three areas: the city centre, Lark Lane, and the Baltic Triangle. These three neighbourhoods of the city provide some of the greatest drinks, live music and amazing best student accommodation in Liverpool. 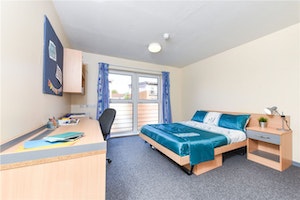 When it comes to UK cities, Liverpool has always been a people’s favourite place to stay, study, and even work. Every year approximately 70,000 students from all over the world come to this vibrant city to learn and carry out their further education. The place has something for everyone with some iconic landmarks to explore such as The Liver Building, the homes of The Beatles and the world-known historic docks. The reason why students love Liverpool is because of the opportunities along with an easy lifestyle.

You will never fall short of things to do in Liverpool. It is known amongst students that Liverpool delivers nightlife in spades. No matter which part you choose to stay in your student accommodation Liverpool, all the exciting things will be in proximity to your residence and you will never miss a chance to explore this amazing city!

Best Localities to Live in Liverpool

Student accommodation Liverpool comes at an affordable price. You will come across Liverpool accommodation at just £80-£120 per week which is far more affordable than other expensive cities in the UK. Student housing in Liverpool has a wide list of studios, private housing, ensuites, and shared apartment options that are built as per students' needs. These properties provide rooms where utility bills are included in the rent which means students don't have to worry about any extra charges except rent and daily expenses. Since these student halls Liverpool are placed near all the prime universities, students will also save a huge cost on commuting. Most prime hotspots are within a walking distance or just a few miles away. You can always choose to travel through public transport as your student accommodation Liverpool has great connectivity. Also, you will find cheap student accommodation in Liverpool that comes for as low as £80 a week.

Best Places To Stay In Liverpool

There are many places to stay in Liverpool which there are some of the best Liverpool student accommodations are listed below.

True Liverpool: There are studios, ensuite rooms, and shared flats available at this student accommodation Liverpool. It is well-equipped with services and amenities, making it a pleasant place to live for students. This accommodation in Liverpool is also in a great location with prime spots nearby, making it a popular option.

The Lantern: The Lantern student accommodation Liverpool combines sophistication with comfort. The spaces here have large rooms, comfortable beds, plenty of storage, and ensuite bathrooms. At this Liverpool student housing, social rooms are also accessible, allowing students to have a fantastic time.

Falkland House: This student accommodation in Liverpool city centre is well-equipped with modern conveniences. It is close to local campuses, allowing you to cut down on your commuting time. Storage, ensuite bathrooms, a study area, and a large bed are all included in the student rooms in Liverpool.

Iconinc - The Ascent: This student accommodation Liverpool is one of the best in the city. It is fashionable, modern, and comfy, making it an ideal choice for students. For an enhanced experience, the student rooms in Liverpool provide amenities such as a gym, laundry, outdoor patio, cinema room, and social spaces.

Cost Of Living In Liverpool

Liverpool, one of the most affordable student cities in the UK, provides a reasonable student experience at top-notch, internationally recognised universities thanks to its competitive tuition prices, scholarship programme, and comparably low cost of living. It's critical to carefully plan your financial resources. The bullet points below provide cost of living in Liverpool

Liverpool has an excellent public transportation system that includes cars, trains, and rails (let's not forget the ferries).

Bus - An economical way to tour the city is via bus. The bus system, which is run by Merseytravel, has two main city centre bus terminals: Liverpool ONE and Queen Square. At both of these locations, helpful staff can offer travel suggestions.

Road - Liverpool is well connected to the UK's motorway system by road. Take the M62, M57, or M56 in a straight line to the city centre from the M6.

When you think about Liverpool, you probably first picture The Beatles, Liverpool Football Club, and their renowned Anfield stadium, one of the biggest in the nation. Of course, there's also the distinctive Scouse accent. Only three miles from the coast, on the east bank of the Mersey estuary, is where Merseyside's centre is located. There is so much more to see in Liverpool, let us check out some of the famous attractions that the students must-see during their time in this city!

Liverpool is well-known for being The Beatles' birthplace. Fans have the chance to walk in their shoes by participating in a variety of tours that visit Strawberry Fields and Penny Lane, among other well-known locations. The reconstructed Cavern Club, where they made their debut in 1961, as well as The Beatles Story in Albert Dock, are frequently included in tours.

The Cavern Walks (which have murals by Cynthia Lennon), The Beatles Shop, and 20 Forthlin Road, McCartney's former residence, are more locations connected to the Beatles. Many of the band's early songs were written and practised here; the location is now open to the public and showcases images and memorabilia from the Beatles.

The first such structure in Britain to be constructed entirely out of brick and iron was the magnificently rebuilt Royal Albert Dock. A striking five-story block of buildings encircling the harbour basin, where cotton, tobacco, and sugar were originally unloaded, forms the city's core. These massive Victorian buildings are surrounded by an arcaded promenade, and the cast Tuscan columns that support them were formerly used as capstans for moored ships. Today, luxurious flats, designer shops, eateries, cafés, and museums are housed in these beautifully refurbished warehouses.

Tate Liverpool, a highly regarded outpost of the Tate Gallery, has opened in the Albert Dock. By happenstance, the London Tate Gallery, which Sir Henry Tate, a sugar baron, left as a legacy at the end of the 19th century, found space in the warehouses where raw sugar was kept before being refined. Contemporary art exhibition halls and galleries, as well as works on loan from the London gallery, are located on the ground level of the "Tate of the North." Free entry is offered.

Many fascinating exhibits regarding the multiple thousands of immigrants who travelled to North America via the Mersey between 1830 and 1930 may be found at the Maritime Museum in Liverpool. A noteworthy collection of relics from Liverpool's maritime history, dating back to the city's beginnings as a fishing port in the 13th century, is also housed at the museum.

What different accommodation types are available for students in Liverpool?

Can I get a furnished student room in Liverpool?

Can I get discounts for student accommodation in Liverpool?