111 places to stay
Sort by:
Relevance

Manchester, the North West's capital, is the United Kingdom's second-most populous city after London. Manchester (UK) is a student-focused city with a lot to experience, offering a diverse mix of music, shopping, sport, and a thriving social scene. Students in Manchester could live comfortably while dining properly, socialising on a regular basis, and reaping the benefits of the city's many attractions.

Manchester greets hundreds of students from all across the world to its best universities – Manchester Metropolitan University, University of Manchester, and Royal Northern College of Music – which are recognised for their architecture, culture, musical exports, media connections, social impact, sports clubs, and transportation connections. You can find student studio apartments in manchester located within a short distance from these attractions.

Manchester's student living costs are a little lower than the national average. Owen's Park, Mauldeth Road, and Ladybarn Road near Sainsbury's are the most popular places to look for student rooms in Manchester. You can find plenty of student houses, student flats, short-stay accommodation, luxury student accommodation manchester, private halls, ensuite student accommodation Manchester , and student studio flats manchester where you'll have access to a wide range of world-class services as well as shared amenities 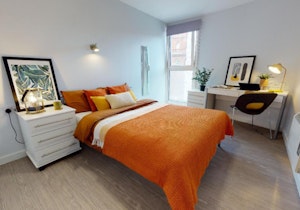 Studio apartment in the heart of Manchester - MAN-936852

Manchester is the capital of the North West and the second-most populous city in the United Kingdom (after London). Whether you currently live in the city or are coming for your first year, there are lots of alternatives for student accommodation in Manchester. Students can select from a variety of flats and studio apartments Manchester student, as well as student halls, dormitories, apartments, and ensuites. The majority of student halls in Manchester are either within walking distance of the main university buildings or may have great links to public transport. This makes it easy for students to save up on their travel expenses.

Manchester, a vibrant city with a distinct Victorian historic charm is full of attractions and wonders that you'll enjoy visiting. With countless events, festivals, and restaurants promoting multi-culture, Manchester encourages inhabitants to appreciate diversity and a variety of cultures. Manchester has a well-deserved reputation as an excellent student city, with around 1,00,000 students across three high-quality institutions.

The University of Manchester is located in the city and is a member of the elite Russell Group of institutions, which are known for their high-quality teaching and research facilities. For both domestic and international students, there is a diverse range of student accommodation in Manchester and the surrounding areas.

Manchester hosts numerous students every year, so there are many student-friendly accommodation options. There are hundreds of places to live in and around Manchester, and the number of students opting for the best private student accommodation in Manchester is soaring. If you have financial responsibilities, job commitments, or are looking for ways to save money, private apartments are highly recommended. If convenience is essential to you, it is better to find student residences in Manchester that are near to the city centre, within walking distance of the university, and have easy access to public transit.

Best Places to Stay In Manchester

Manchester is amongst the most populated places in the UK, second to London. The City centre, Victoria Park, Fallowfield, and Withington are amongst the most popular places to stay in Manchester for students. These areas comprise a broad range of speciality stores, supermarkets, restaurants, pubs, recreation centres, and more. With the city’s universities located within the vicinity of these areas, finding student accommodation in Manchester is convenient for those from overseas. UniAcco lists some of the most budget-friendly student houses in Manchester in these sought-after places and beyond. Here’s a list of them -

iQ Lambert & Fairfield House: Classic en-suite rooms, private en-suite rooms, one-bedroom flats, and two-bedroom flats are available at this property. All rooms have a desk chair, drapes, a closet, under-bed storage, a fully equipped kitchen with a breakfast bar, a fridge/freezer, a microwave, and a couch.

iQ Kerria Apartments: Kerria Apartments are located in Rusholme. At this student accommodation in Manchester, you can find one and two-bedroom flats. This property boasts fully equipped rooms, as well as all-inclusive rates and complimentary Wi-Fi. Manchester Metropolitan University and The University of Manchester are both nearby.

iQ Daisybank: This is one of Manchester's most popular housing alternatives, with Ardwick railway station nearby and the Daisy Bank Road bus station nearby. A wide range of restaurants, cafés, clubs, and pubs are all within easy walking distance. There is a 24-hour staff presence and 24-hour surveillance with CCTV cameras to ensure that your stay is safe and secure.

Chancellors Court: This student housing complex contains flats with two, three, four, or five bedrooms. Regardless of the choice you choose, you can get Wi-Fi, a study desk, and a double bed. Students can contact on-site employees 24 hours a day, seven days a week.

Cost of Living in Manchester

Manchester's low cost of living makes it a good choice for students wishing to enjoy a large city on a tight budget. It is consistently listed as one of the most affordable places in the United Kingdom for students to live. You may experience some of the lowest travel fares in the country, as well as inexpensive student apartments in Manchester, local companies, services, and nightlife venues compete in your favour with ceaseless discounts and promotions. The following are spending breakdowns for average Manchester undergraduate and postgraduate students -

The city’s rail and road links make it simple to get about the city and to the rest of the UK from your student accommodation in Manchester. It has an outstanding public transportation system that includes local bus, train, and tram services that are all reasonably priced and provide student discounts.

Cycling: Cycling is most likely the most cost-effective mode of transportation. Manchester has a network of cycling routes, notably in student neighbourhoods.

Bus: There are various bus services in the city, and they are all looking for passengers, thus tickets are quite inexpensive. The Magic 147 bus provides free transportation between the Sackville Street and Oxford Road parts of campus for University of Manchester personnel and students.

Taxis: A taxi across the city centre will cost approximately £5, which is a more expensive mode of transportation. There are several taxi ranks throughout the city, including a huge one near Piccadilly Station.

Train: Piccadilly and Victoria are Manchester's two prominent railway stations. There are additional smaller stations in the city centre, such as Manchester Oxford Road, which is about a ten-minute walk from Oxford Road and Sackville Street regions.

Trams: The Metrolink tram service in Manchester provides frequent trips to Altrincham, Eccles, Bury, and Rochdale. East Didsbury and Ashton-Under-Lyne are nearby. It also provides transportation to the Trafford Centre and The Lowry.

Manchester, Lancashire's economic and cultural capital, is a well-known hub for the arts, media, and higher education. It forms the metropolitan county of Greater Manchester, together with Salford and eight other municipalities, and is home to around five million people. It is no surprise, then, that student accommodation in Manchester is plentiful, and with it, there's a plethora of things to do and places to visit in this buzzing city.

Castlefield, one of Manchester's most well-known landmarks and an Urban Heritage Park, is a fantastic site to begin exploring the city. A stroll inside the recreated Roman Fort or along the ancient canals amongst the magnificently maintained Victorian buildings is time well spent.

The Science and Industry Museum is located near the world's oldest railroad station. Its 12 galleries are comprised of the Power Hall, which has water and steam-driven machinery from the golden period of the textile industry, as well as vintage made-in-Manchester automobiles, including a rare 1904 Rolls Royce.

Manchester Cathedral, formally the Cathedral and Collegiate Church of St. Mary, St. Denys, and St. George, is one of Manchester's most prominent attractions. It is located on the banks of the Irwell River and dates largely from 1422 to 1506; it was raised to cathedral rank in 1847.

Know more about Student Lifestyle and Living in Manchester

Studio apartment in the heart of Manchester - MAN-936852

What different accommodation types are available for students in Manchester?

Can I get a furnished student room in Manchester?

Can I get discounts for student accommodation in Manchester?