16 places to stay
Sort by:
Relevance

Exeter is well-known for its gorgeous surroundings and its great combination of city and country life. Students may enjoy the cosmopolitan lifestyle in this friendly and varied city while also having quick and simple access to the stunning landscapes of South West England. There are a variety of student houses in Exeter for students to choose from. Contemporary stores, shopping malls, cafés, and other services make it the perfect destination for students. The city also has a low crime rate, in addition to a great quality of life for students. Exeter is now found among the UK's fastest increasing population with many affordable options of student accommodation in Exeter to choose from.

The campuses of the University of Exeter and Exeter College are both just on the outskirts of the vibrant city centre. Finding student flats in Exeter located within the vicinity of these universities as well as the major attractions is a simple and hassle-free process. According to Times Higher Education, the University of Exeter is consistently ranked among the top 100 institutions in the world, giving the city a distinct reputation for creative research and thought leadership. 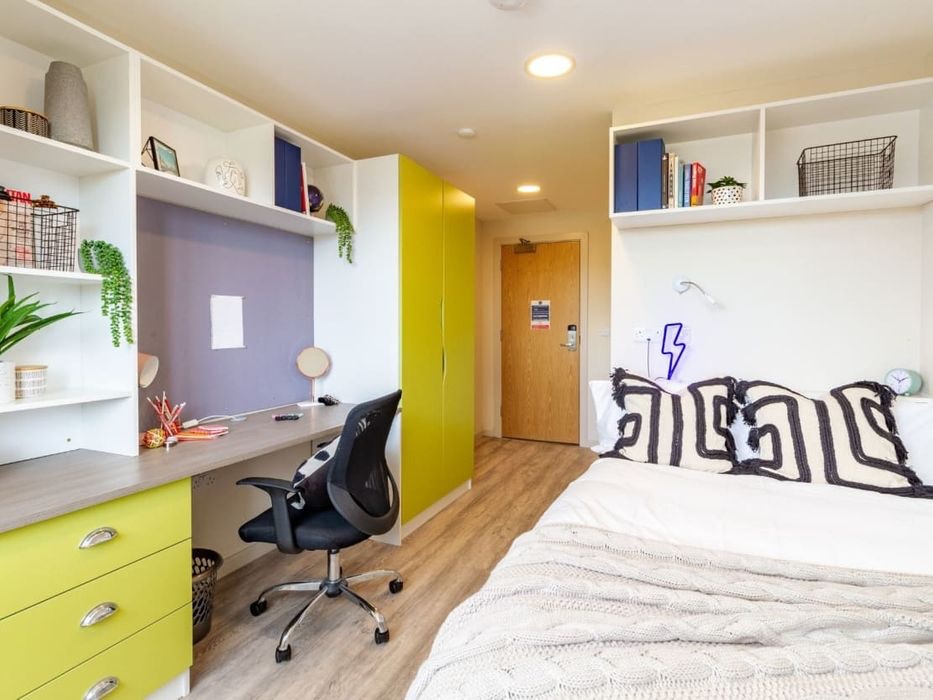 Exeter, home to one of the UK's most prestigious colleges, is a magnificent city with a rich history and pleasant surroundings. Owing to the increase in the yearly inflow of international students, the city welcomes students with a diverse choice of student homes, flats, and student accommodation in Exeter most of which are conveniently located near the institutions. The city has 60 halls of residence, which comprise both university-run and privately-owned student housing.

Exeter is a city that blends a modern ambience with a rich history and a tranquil setting. Within a 20-minute walk, you can reach all of the major attractions, including the stunning university campus and some of the city's greatest restaurants and nightclubs. The city's population is mostly composed of students, resulting in a vibrant and cheerful atmosphere.

Exeter attracts over 30,000 overseas students each year, making it one of the most popular international education destinations in England. From science & engineering to arts, fashion and psychology, Exeter is home to a plethora of prestigious institutions such as the University of Exeter, Exeter College, Plymouth Marjon University, and the University of Plymouth. This makes it convenient for students to group together and find shared student housing in Exeter that is close to their institutions.

Where Are Students Coming From?

Exeter currently has over 24,000 students, including over 5,000 international students from 140 countries around the world. Exeter is a student-friendly city with a diverse population; international students can enjoy the multiracial lifestyle while being close to the stunning landscapes of South West England. Exeter is well-known for its picturesque surroundings as well as its perfectly balanced city and rural life. The University of Exeter is a member of the prestigious Russell Group of research-intensive universities, with 98% of its research rated as great for international quality and 82% rated as world-leading or internationally excellent.

Here’s A Breakdown Of Statistics For International Students In Exeter

These are the top 10 countries from which students come to Exeter to pursue higher education. Since the city receives many international students each year, there are also other source countries like Italy (145), Switzerland (130), Turkey (130), Thailand (120), United Arab Emirates (140) and many more that contribute to the city’s international student market. According to the data, the city has large numbers of students who travel to pursue their higher education and also look for student accommodation in Exeter. Students from China, India, Germany, the USA, Pakistan, and more can choose from thousands of student rooms in Exeter which include pocket-friendly to luxurious accommodations consisting of comfortable, budget-friends ensuites, shared apartments and studios.

Exeter is a historic city in Devon, located on the Exe River. The city is home to the University of Exeter, which annually attracts around 25,000 students. Students are frequently torn between the university's halls of residence and private student flats in Exeter.  Private housing in the city is well-regarded due to its successful housing provision throughout the city. Private halls range in size from a single en-suite room with a shared kitchen to a private studio flat with access to a variety of exclusive facilities. There is also a considerable supply of student apartments in Exeter, including flats, apartments, and more, which are generally located in central locations and may be rented privately or communally.

Best Places to Stay in Exeter

When it comes to deciding where to live in Exeter, students have multiple alternatives. Two of Exeter's most popular student neighbourhoods are St Leonards, which has a village feel to it, and Exeter Quayside, which includes loft-style flats with river views. Both of these locations offer outstanding student flats in Exeter since they are only a 10-minute walk from the city centre. UniAcco has a list of some of the most popular student housing in Exeter that are both affordable and conveniently situated close to public transportation, making commute easy for students.

The Barn: Nominated for Best Individual Accommodation in the National Student Housing Awards, the Barn is an amazing flexible student accommodation in Exeter that has been developed specifically for students. This apartment includes a number of features that will fulfil your requirements. Not only is the property adjacent to Exeter's finest universities, but it also has easy access to public transit.

Queen Street Studios: This student rooms in Exeter has a variety of Exeter studio accommodation flats with ensuites. It is a one-minute journey from Exeter College and provides a variety of amenities for students to ensure a pleasant stay. If you wish to explore the city, you can simply access public transit from the premises.

Vita Student Portland House: Vita Student is an excellent place for students to reside in. It provides contemporary en-suite rooms in shared apartments and studios. There is free internet, a kitchenette, a study space, a wardrobe, a lounge area, and much more. This Exeter Halls is where the apartments have been carefully picked to provide a comfortable and cost-effective stay.

Cost of Living in Exeter

Exeter is a fantastic student city; captivating and full of character, but there's no denying that the city exudes approachability and diversity that appeals to all tastes. Another perk is its setting; you'll have the privilege of living in a metropolis with the greatest of Devon's beaches and national parks, where you can leave the city and enjoy some of the region's best surfing, climbing, and panoramic views. Here are some of the cost of living in Exeter that students experience during their university life:

Exeter, the city, is strategically connected to every major transit system, which is conveniently accessible and within walking distance of any university. Students in Exeter have access to a variety of transportation options, including the world-famous Exeter train station, buses, and friendly taxis. Most of the private student accommodation in Exeter is located within short walking distance from public transport.

Bus: Exeter's bus network operates 24/7, with over 100 buses operating up and down the city. Students may catch buses from the major bus station near the City Centre, which connects to all of England's national roads. There are hundreds of local bus stations located around the city, catering to both local and national travellers. In Exeter, the average bus price is roughly GBP 1-1.20 per day.

Irish Ferries: The city also has Exeter Port ferries, which allow residents to get in and out of the city through Exeter Ferry Boats.

Cycling: Alternatively, you may also use your bike to explore the city's neighbourhoods from your student accommodation in Exeter. You can visit Exeter's special riding locations, such as the city's well-known Belmont Park.

With its granite tors and broad moorland, Dartmoor has a surreal aura that few other places can equal. It's easy to travel to Dartmoor from your student accommodation in Exeter: a drive away from one of the many frequent bus links to the region's various towns and villages. There are ancient standing stones and Bronze Age hut circles, as well as some of the greatest pubs, to be found here.

Every year, the Beautiful Days music festival takes place on the grounds of this National Trust property from just outside Exeter. The estate and grounds are open for tours, and the Trust sponsors a variety of events throughout the year, including farmer's markets, antique car displays, and nature-themed courses.

If Devon has one thing in abundance, it is unquestionably its breathtaking natural beauty. The Jurassic Coast is a World Heritage Site that begins in nearby Exmouth and stretches to Swanage in Dorset. Its towering, granite cliffs, which represent 180 million years of history, have been awarded the fifth-greatest natural marvel in Britain.

This was the last castle in England to be made entirely of granite, and it was finished in 1930. Drogo is a wholly unique castle, with design components borrowed from mediaeval through Tudor castles, mixed with modernist approaches of the time. Its exquisite formal garden is packed with magnolias, rhododendrons, and roses that contrast with the harsh Dartmoor landscape.

This aquarium is not only the largest in Plymouth, but also in the UK, and students can take the train from St. David's which is the most common way of commuting to the National Marine Aquarium. It exhibits marine life from the Plymouth Sound, the Atlantic, and the Great Barrier Reef. Interested students may wish to attend the shark feedings and educational workshops to gain a deeper knowledge of these amazing creatures.

Exeter is a small city in the United Kingdom with lovely countryside and friendly locals who will make your international education experience rewarding and enjoyable. The universities in Exeter offer an academic environment that encourages student engagement and focuses on cutting-edge research methods. More than 3,000 students from 130 countries other than the United Kingdom contribute to a thriving international community on Exeter's campuses.

The University of Exeter is a research-oriented public university. It was founded in the year 1955. The university is a member of the Russell Group, which includes the top research-intensive universities in the United Kingdom, and it has three campuses. It has more than 25,263 students from more than 130 different countries. The University of Exeter, in particular, is well-known for its study degree options such as medical healthcare, engineering, information technology and multi-media, biotechnology, business and economics—at all Bachelor's, Master's, and PhD levels.

The university's administrative and educational departments are divided into six scholastic colleges. On campus, there are numerous research centres and institutes. There are over 200 student societies, including a creative writing club, a theatre club, Socialist Student Societies, a Poker Society, and a Conservative Future Society. The university has an athletic union that is in charge of organizing and administering all sports activities fairly and actively. The union governs over 50 sports clubs with approximately 5,000 students.

Exeter has only one university, which has two campuses in the city. The University of Exeter has consistently been ranked among the top 400 world universities in The Times Higher Education rankings. The school provides excellent internship opportunities with local businesses, allowing students to gain real-world business experience.

What different accommodation types are available for students in Exeter?

Can I get a furnished student room in Exeter?

Can I get discounts for student accommodation in Exeter?