32 places to stay
Sort by:
Relevance

Aberdeen is one of Scotland's busiest cities. In this city, the hustling and bustling may be heard till late at night. There are numerous cultural activities, museums, and attractions to explore in the city. Student accommodation in Aberdeen is strategically located to allow easy access to the city's main attractions.

Bars and pubs may be found almost anywhere, allowing you to have the time of your life. Malls, open spaces, and other recreational facilities are all available for you to spend your free time in peace. The Aberdeen Art Gallery, Marischal Museum, and Aberdeen Maritime Museum are among the city's most well-known museums. Many cultural and youth festivals, such as the Aberdeen International Youth Festival, the Inter Varsity Folk Dance Festival, and The Aberdeen Student Showare held in Aberdeen. 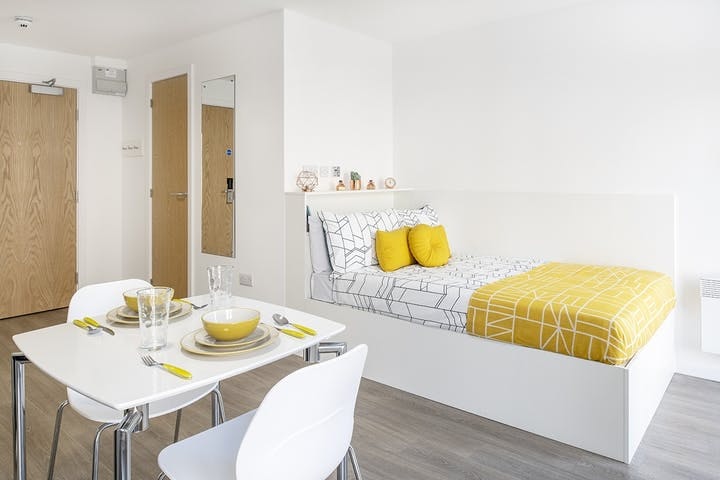 60 Spring Gardens, AB25 1GN
No Visa No PayNo University No Pay
View Details
Select more than one property to compare

Aberdeen is one of the most popular student cities in the UK not only because of its scenic views but also because of its highly affordable costs. Aberdeen is a thriving, innovative, and forward-thinking city noted for its historic charm and diverse society. The City of Aberdeen has something for everyone, from the bustling city centre of Europe's Energy Capital to the stunning countryside and beaches. Apart from Aberdeen tuition costs, a range of aspects are considered while selecting a destination, which may include the cost of Aberdeen university halls of residence, student housing, food and culture, life, the living cost for foreign students in Aberdeen, and other elements. Your cost of living in Aberdeen will significantly dropdown if you choose a best student accommodation in Aberdeen that is off campus rather than on campus.

Aberdeen, Scotland's third-largest city, is a popular choice for international students. Aberdeen is a vibrant, historical hub for international students, and it is the only city in the United Kingdom to be on the list of top 50 affordable cities for international students. It is a thriving university city located in northeastern Scotland and is also known as the "Granite City" or "the Silver City with the Golden Sands." Aberdeen has a student population of around 20,000. Every year, students flock to this seaside town, where there are plenty of job opportunities for young people looking to settle down. If you are an international student who wants to make the most of their student life in Aberdeen then it is highly recommended for you to choose student flats in Aberdeen that are closer to the prime locations in the city such as the Union Square shopping centre, Codonas Amusement Park, His Majesty’s Theatre and more.

Choosing where to stay in Liverpool might be difficult with so many options. The option of whether to live on-campus or off-campus flexible student accommodation in Aberdeen is the most challenging for students. On-campus accommodation has the disadvantage of being pricey, and room availability might be a problem. They are, nevertheless, close to campus. On the other hand, off-campus housing is less expensive and provides students with more facilities and amenities than on-campus living. Off-campus accommodation choices are also available in Aberdeen, which are within walking distance of the institutions. UniAcco provides some of the best Aberdeen accommodation. Furthermore, these student flats are near the city centre and well-known landmarks such as the Rosemount, Midstocket, Old Aberdeen and more.

Best Places To Live in Aberdeen

If you are searching for private & luxury student accommodation in Aberdeen, there are plenty of options available to you if you are a full-time student in any of the universities or colleges in the city. Here is a list of some of the top Aberdeen accommodation where you can find luxurious accommodation on a budget.

En-suite and studio rooms are available at Pittodrie Street student flats in Aberdeen. The en-suite can accommodate up to 8 people, and the studios may accommodate two people at no extra charge. Students are supplied with a bed, Wi-Fi access, a laundry facility, and 24-hour personnel to help them with their daily concerns. The establishment is ANUK and National Code certified.

Mealmarket Exchange is the best student accommodation in Aberdeen offers up to 6-bed en-suite and studio rooms, the studios can host dual occupancy at no extra cost. A laundry room, a Wi-Fi connection, a bed and 24/7 on-site staff. It has ANUK and National Code.

This student flat near Aberdeen provides studio and en-suite rooms. Irrespective of your room choice, you can enjoy a Wi-Fi connection, key access and CCTV security. There is a 24/7 on-site staff available at the beck and call of students.

Spring Gardens student accommodation provides studio rooms, en-suite rooms and even apartments. Irrespective of your room choice, you can enjoy a Wi-Fi connection, key access and CCTV security. There is a 24/7 on-site staff available at the beck and call of students.

Cost Of Living In Aberdeen

Many other institutions increase their tuition by 5% to 9% each year. The University of Aberdeen is committed to ensuring that international students are aware of the cost of living in Aberdeen before they arrive. Their fixed fee system allows foreign students in Aberdeen to plan ahead and save money on living expenses. The average tuition fee in Aberdeen for a four-year course is £72,000. Aside from educational fees, students would require money to cover living expenditures such as accommodation, food, books, movies, clothing, phone bills, local transportation, and laundry. These expenses may vary depending on the student's lifestyle and spending habits. According to UKVI standards, students should budget £3,500 per month to cover their monthly cost of living in Aberdeen.

Although Aberdeen is known as the Granite City, did you know that it has nearly a quarter of its area dedicated to open space, such as parks and gardens?

It's no wonder that the city has won Britain in Bloom ten years in a row! On a bright day, you may skip the library and head to one of Aberdeen's many parks, which range from the city's Union Terrace Gardens to the sprawling 44-acre Duthie Park.

Off-campus student accommodation in Aberdeen will allow you to explore a bunch of places in this city that you may miss out on while living on campus. Let us take a look at some of the best places to visit in Aberdeen.

The main mode of transportation in Aberdeen is the bus. First Bus Aberdeen has a monopoly on the city’s buses.  However you will also find StageCoach buses running a few lines with some local bus services. Aberdeen buses cover more than 30 routes to get around the city most of which start from the outskirts of the city to the city centre.

There are no local commuter systems in Aberdeen and the city is served by national rail connections. You can catch intercity railways to get around the city and regional and local trains to get to other parts of the UK.

Another great way to get around Aberdeen is by cycling. You may want to invest in a bike-sharing scheme in the city if you plan on owning a cycle for a long term. The city has a great route for cyclists that connect the suburbs through the city centre.

This is one of the finest regiments in the world and as a student in Aberdeen, you must visit this museum at least once. The history of this museum roots back to the 18th century and its service in the gulf war. The museum's collections include uniforms, arms and equipment used by the regiment and its opponents through the centuries, as well as extensive archives that are available for use by researchers.

Aberdeen has long prospered off of sea-based industries, from the boom of the city's fishing industry in the early 20th century to its oil industry today; this museum explores the historic developments behind the city's maritime industries. The Aberdeen Maritime Museum, located near the busy harbour on the historic Shiprow, tells the storey of the city's long and often dramatic relationship with the sea, from the city's earliest days of trading, fishing, and shipbuilding, to the discovery of North Sea oil and gas, and Aberdeen's current position as a global leader in energy transition.

Locals and visitors alike like Duthie Park's beautifully preserved Victorian features, such as the Band Stand, fountains, and boating ponds. The park also contains an astro turf field for ball activities, as well as two other play spaces, one for smaller children and the other for the more adventurous youngster, which was named best play space in Scotland by The Nancy Ovens Trust in 2013. The Park Café is also well-liked by guests.

What different accommodation types are available for students in Aberdeen?

Can I get a furnished student room in Aberdeen?

Can I get discounts for student accommodation in Aberdeen?