48 places to stay
Sort by:
Relevance

Newcastle is home to many prestigious institutions of higher learning, including Newcastle University and Northumbria University, which are ranked highly as two of the best in the UK. That means you'll not only graduate with a highly valuable degree, but you'll also have plenty of opportunities to meet friends among the 45,000 students who enrol each year. Consistently ranked as one of the best student cities in the United Kingdom, there are a variety of student flats in Newcastle upon Tyne for students to choose from.

Newcastle is a fantastic place to begin your studies, and you'll be in good company with a diverse population of university students from all over the world. Finding student lettings in Newcastle upon Tyne, located within the vicinity of these universities as well as the major attractions is a simple and hassle-free process. The city is well-known for its interesting knowledge, excellent local and high-street shopping, renowned landmarks, welcoming residents, and rich history. Newcastle will feel welcome from the moment you arrive, regardless of who you are or even what you enjoy. You're sure to find companions during your time in the city, even if you're not in school, thanks to their widely known accent and enthusiasm for Newcastle United. Studying in this city will provide you with amazing student accommodation in Newcastle upon Tyne along with a fantastic social life. 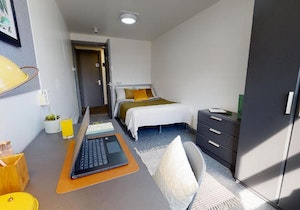 Newcastle is one of the most iconic cities in the UK, receiving hundreds of students from several countries each year. Student accommodation in Newcastle is stacked with modern facilities and features that allow students to live comfortably, and at their convenience. At UniAcco, there are several excellent student houses in Newcastle that are centrally located near the city's top universities. The student flats available have prices ranging from GBP 80 to GBP 200 per week, inclusive of all the bills. Some of the most preferred private accommodations offered by UniAcco at Newcastle include iQ Stephenson House, St James’ House, iQ Collingwood, and Newcastle 1, amongst others.

Newcastle upon Tyne is well-known for its vibrant nightlife and has a stunning 42,000 student population, making it one of the greatest cities for student living. It is owing in part to the city's compactness, which allows it to be large enough to be bustling and thrilling while being small enough to feel like home. It's also because of the sheer number of students: one out of every six individuals in the city happens to be a student.

The city has a significant economic sector and is very important in the country since it is the epicentre of England's commercial, transportation, and cultural commerce. Newcastle receives a large count of overseas students each year, making it one of the most popular global academic destinations in England. Newcastle is home to a significant number of advanced institutions offering popular courses ranging from science and engineering to arts, fashion, and psychology.

It is no surprise, then, that the city's student housing market has reached new heights, with a variety of room types available for rent to international students. Student accommodation in Newcastle has a modern feel to it despite the city’s rich history & heritage. Moreover, most of the Newcastle student housing can be located within easy reach of the city centre and other common areas of interest. Newcastle is a shopper's delight, with everything from major high street brands in Eldon Square to smaller businesses and Tynemouth's weekly market.

Newcastle fondly referred to as ‘the world’s smallest big city’ attracts a number of international students to its reputed universities. Cheap student accommodation in Newcastle is available in plenty, with multiple options given to students so they can pick what suits their interests the best. UniAcco offers cheap Newcastle accommodation, all of which are located within easy reach of the top universities. Many students are often torn between opting for the university’s halls of residence and private student housing.

While the residential halls provided by the university may have the advantage of proximity, they may be expensive and their availability cannot be guaranteed. With UniAcco’s student housing options in Newcastle, students get the opportunity to live close to their university while enjoying the benefits of the all-inclusive bills coupled with an array of facilities.

Best Places To Stay In Newcastle

The bustling city centre of Newcastle is home to both the city’s notable universities, namely, Newcastle University and Northumbria University. Some of the other prominent Newcastle places that overseas student soften prefer staying in would include Sandyford, Jesmond, Heaton, and many other areas. UniAcco offers plenty of student accommodation in Newcastle in the aforementioned areas and beyond. We have picked out the best amongst them and have them listed below -

Cost Of Living In Newcastle

According to studies, the average cost of living in Newcastle for students is about 50% lower than in adjacent cities such as London or Birmingham. Despite its proximity to the urban elite, Newcastle is one of the most inexpensive cities in the United Kingdom. Whether it is expenditures related to student accommodation in Newcastle or other living costs, there are many expenses to consider. A breakdown of the average monthly expenditures associated with Newcastle students:

When determining how to move around Newcastle, there are several alternatives to pick from; it couldn't be more convenient.

Taxis: Taxis are abundant in the neighbourhood. It should be noted that there are various taxi services in Newcastle, including Blueline Taxis, Budget Taxis, and La Taxis. There are additional taxi ranks open 24/7 at Central Station, Grey Street, and Gateshead Bus Interchange.

Buses: They are well-connected across the city and run regularly. For those who want to go somewhere that isn't in the city centre, such as shopping malls like Intu Metrocentre, there are specialised buses that leave from the city.

Metro: The city also features the Tyne and Wear Metro, a light rail system that links Newcastle to the airport, the coast, and the neighbouring city of Sunderland. This method of transportation connects to key areas and landmarks including St. James' Park, Jesmond, Tynemouth, and Monument.

Newcastle, an industrial city on the River Tyne, has several notable Victorian buildings and streets in its heart, as well as three huge retail areas. It's also well-known for its numerous intriguing museums and entertainment venues, including the famed Theatre Royal and City Hall, which serve as popular sites for theatre, events, and festivals, as well as pop and rock concerts. Most student accommodation in Newcastle is within easy reach of these Newcastle attractions.

In and around Newcastle, seven bridges span the River Tyne. Three of them are globally renowned for the novel method to bridge construction that they established. The Tyne Bridge, on the other hand, best represents the city's identity. It was the biggest arch of any bridge in the world when it was completed in 1925 and inaugurated by King George V in 1928.

In the renovated Quayside district near the Tyne and High-Level Bridges, many of the former homes are now hotels, stores, and eateries. The 2.5-mile Victoria Tunnel, which passes through the city from the Town Moor to the Tyne, is a unique underground tourist destination.

The Cathedral Church of St. Nicholas is the official name of Newcastle Cathedral, which was constructed in the 14th and 15th centuries. But its lantern tower is its most outstanding feature. It was built in 1435, is over 197 feet tall, and is crowned with a magnificent Scottish Crown with crenellations. The tower is impressively floodlit at night.

Eldon Square
Around Eldon Square, a sizable shopping complex that includes the Central Arcade, Eldon Garden, and the shopping mall of the same name has emerged. The neighbourhood is home to a multitude of lanes lined with shops, attractive arcades, upscale designer boutiques, eateries, and cafés, as well as some excellent antique shops on Vine Lane. When a little retail therapy is required, these are all great options to explore.