135 places to stay
Sort by:
Relevance

The dynamic city of Birmingham houses 5 prominent universities with about 65,000 students who relocate or find comfortable luxury student accommodation in Birmingham. As an international student in pursuit of your higher education in the city, you can explore a plethora of things to do, visit, and see. From visiting the all-time famous Cadbury World to dining in the world-renowned Balti Triangle, the city has so much in store for students.

Birmingham residents are commonly referred to as Brummies. They are known to be really kind and welcoming. If you already have an offer from universities such as the University of Birmingham, Birmingham City University, University College Birmingham, or Aston University, you can discover suitable studio accommodation in Birmingham nearby.

The cost of living in the city is also influenced by the type of student housing in Birmingham, your lifestyle, your transport preferences, and other factors. As you travel further out from the city centre, the average rent in Birmingham lowers. Furthermore, several types of student apartments in Birmingham can be found across the city centre and beyond, all of which are easily connected to excellent public transportation. 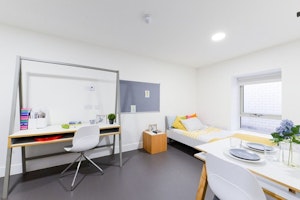 Birmingham is one of the most famous city in all over England, packed with opportunities for everyone. It is the second largest city in the UK. You will find a plethora of options when it comes to student accommodations in Birmingham. UniAcco provides multiple student housing in Birmingham that are located close to your desired university. You can choose from comfortable and pocket-friendly housing that starts at GBP 104/per week. These accommodations are en-suites, studio housing, and shared apartments. One great advantage of choosing from UniAcco is that you will find rented housing with all-inclusive utility bills.

Student accommodation in Birmingham is super affordable and even considered as the cheapest in the UK. Some of the most famous student housing are iQ Studios 51, The Heights, iQ Penworks House, Onyx, iQ Broderick House, The Old Fire Station, and Kensington House. These student flats in Birmingham are all located closes to your universities and come with ample amenities. Birmingham City University and the University of Birmingham are located in proximity to your student flat.

Birmingham is a metropolitan city with universities that are backed by science & technology. It is an outstanding city to live and study in because of its massive student population and vibrant cultural scene. It is UK’s most diverse city with more citizens from overseas. That is why students choose to study in this city and this gives an advantage to major student accommodation in Birmingham hence you get the benefit to choose from multiple options.

The city also has a very low crime rate and is a safe place to study for students. It is a fantastic place to study with great infrastructure and cultural sites. Not just that, the city is also well connected and has great travel links through which you can literally go almost anywhere. Because of its high connectivity added with many other beneficial factors, Birmingham hosts almost 80,000 students every year. You will find cheap student accommodation in Birmingham that is safe and well located near all prime locations.

Student studios in Birmingham come with a friendly environment that is made as per the needs and preferences of today’s students. If you choose to live in private student accommodation in Birmingham then you get the advantage to choose between studio flats, entire flats, private rooms, student halls in Birmingham, shared rooms, and even ensuite flats. These options open a way for international students who wish to explore and make a choice. Each room will have its own set of specifications.

For example; in shared rooms, you will have to share a bathroom & kitchen along with a common space whereas if you book a private flat then you get a personal study space, bedroom, ensuite bathroom, and wardrobe. Depending on your needs & budget, check out UniAcco’s choose & compare feature to book the right accommodation in Birmingham.

Best Places to Stay in Birmingham

Britain’s second-largest city undoubtedly does not disappoint. With its massive size, the city holds some of the best areas and neighbourhoods that you can choose from to stay in and enhance your study abroad experience. Check out some of the best ones down below!

The city centre is one of the most exciting places to live in Birmingham. Fine dining, seeing significant sites of worship, or a little retail therapy in the famed Bullring are all within walking distance in the city centre. Much of the neighbourhood has since been made pedestrian-friendly, making it perfect for early morning strolls. When time is of importance, you'll want to cram as much as possible into your schedule. Student apartments in Birmingham located near the City Centre might come a little expensive but they are indeed very beneficial if you wish to stay a luxurious and lively life.

Birmingham hasn't sat on its laurels for long. The Westside is the most recent neighbourhood to get a makeover. Westside, which includes Brindleyplace, the Sealife Centre, Broad Street, and the ICC, as well as new developments such as The Cube, Regal Tower, and the Birmingham Library, was created to make living, working, and socializing in a big city environment less stressful and more laid-back, and it's working.

Digbeth has greeted the twenty-first century with open arms, having emerged from a gloomy, dirty, and depressing industrial region in the early twentieth century. It has evolved into a distinct, trendy, and creative district of arts, crafts, and independent producers and shops, formerly a powerhouse of Birmingham's industrial force. Digbeth is currently home to artisan dealers, independent stores, vintage outfitters, cinemas, and art venues, all close to the university's City Centre Campus and just a few minutes walk from the Bullring and New Street Station.

Edgbaston is a good place to stay in Birmingham if you want to be quiet in the evenings but yet have lots to do during the day. Edgbaston is a tranquil, relaxed, lovely place in suburbia that has been home to Warwickshire County Cricket Club since 1885 and England Test Matches since 1902. However, the bustling city centre is only a short distance away.

Cost of Living in Birmingham

Birmingham is a great choice for students who wish to live in the heart of the city and yet enjoy a laid-back atmosphere. There is something for every individual here. International students who wish to study and stay in student accommodation in Birmingham will need to learn the cost of living in Birmingham to get an estimate of how much they will be spending here. To make it easy, we have listed down a few essentials that will help you curate a budget.

The city has a pretty well-connected travel system. You can choose to travel by trains, buses, and metros to save costs marginally. All the student housing in Birmingham on UniAcco is located in and around the city that is well-connected via public transport. It is usually favoured because of the low cost. You can even opt for walking and cycling in Birmingham. Let us check out different modes of transport and learn more about their cost.

Bus: The National categorical West Midlands utility is the largest utility; nevertheless, look out for Pete's Travel and Birmingham utility as well. If you need a map, bring a Birmingham route planner. One fare is currently 1.70. For long-distance travel, take the National Category or Megabus (cheap).

Rail: Outside of London, Birmingham New Street is the busiest railway station in the UK for passenger entries/exits and intersections. A day pass can cost roughly GBP 4.50, with a single price tag costing around GBP 2.

The city of Birmingham is a culturally rich place with heritage sites and contemporary recreational activities. There are wonderful places in and around the city that students can explore while their stay in Birmingham. Below we have listed some of the greatest attractions in Birmingham.

The Birmingham City Centre Path leads to Victoria Square, which is the city's beating heart. The majestic Town Hall, fashioned of Anglesey Marble, is a perfect example of Victorian architecture. The River, Mistry's fountain, is the square's largest sculptural feature.

The Birmingham Museum and Art Gallery, which opened in 1885, is widely regarded as one of the best museums in the country. It contains works by pre-Raphaelite painters as well as paintings by painters from the 17th to 19th centuries. The museum also features excellent exhibits about the city's history as well as archaeological artefacts from the Stone Age. Coins from antiquity to the Middle Ages, antiquities from Ancient India and Central Asia, Ancient Cyprus, and Ancient Egypt are among the artefacts on display.

Innumerable species can be found in the 15-acre nineteenth-century Birmingham gardens. The gardens are recognised for its exquisite bonsai trees and tropical wildlife. The British National Bonsai Collection is housed on the grounds, which contain over 7,000 different plants. The "Omiya tree," a 250-year-old Juniperus Chinensis in the casual upstanding type, exposed to the community in 1995 by the then city of Omiya, Japan, is probably the most well-known example.

The Birmingham Science Museum is a must-see attraction for everyone interested in science. ThinkTank is home to a variety of science exhibitions, the majority of which are interactive and hands-on. This is why it is so popular among scientific aficionados and youngsters alike. This museum exhibits everything from aeroplanes, locomotives, vehicles, and tractors to steam engines, trams, and the famous chocolate packaging machine, as well as the Woolrich Generator, the world's first heavy electrical equipment.

What different accommodation types are available for students in Birmingham?

Can I get a furnished student room in Birmingham?

Can I get discounts for student accommodation in Birmingham?