112 places to stay
Sort by:
Relevance

With the help of UniAcco, students can browse through hundreds of properties that are located in prime areas. You will have a chance to stay in studio rooms, ensuite apartments, private rooms, shared rooms, student halls, and so much more. You get a choice to compare multiple properties to boil down to a single option that suits you best. Choose from multiple University of Manchester student accommodations that are fully furnished with modern amenities that come at a pocket-friendly price 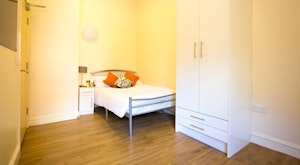 About The University of Manchester

The University of Manchester, sometimes known as the MU Manchester, is a prestigious research and academic institution located in the centre of Manchester, England. It was established in 2004, although its roots may be traced back to 1824 when the city needed a centre for technical education. The university is a part of the Russell Group and is renowned for its excellence in research and academics. The Manchester Museum, John Rylands Library, Whitworth Art Gallery, and Jodrell Bank Observatory, which is a UNESCO World Heritage Site, are among the significant cultural institutions it owns and manages.

The University of Manchester now boasts 25 Nobel laureates among its former, present, and members, which ranks it fourth among all UK universities. The uni boasts more clubs and societies (480+) than any other university, creating a lively and dynamic environment. More often than any other university (High Fliers 2006–2019), it is ranked as the most targeted university by graduate recruiting firms. All of this makes it a hotspot for students to choose and study here, hence an added advantage is that finding private University of Manchester accommodation is also easier as there are many options available.

Currently, Manchester College only has one campus. Students can easily travel to adjacent places because the Manchester campus is located on Oxford Road and is only one minute from the city centre of Manchester. The extensive Manchester Transportation Council network, which connects all areas of the city, including the University of Manchester, is well known in the area. The Manchester public transportation system is organised into numerous zones that encompass all of the city's popular areas.

The University of Manchester's main campus contains the main building on Oxford Road, Manchester M13 9PL, United Kingdom, which is a short commute from the city. The main structure is located within walking distance of the most popular tourist destinations. It is encouraged for first-year students staying at University of Manchester accommodation to speak with their local train authorities and get a discounted Manchester PlusBus pass, an electronic ticket that can be used on some overground train routes as well as the underground system and buses.

Best Student Accommodation at The University of Manchester

The University of Manchester accommodation provides a variety of alternatives in the form of halls of residence, which ensures a spot in university-managed housing for only first-year undergraduates and international students. Near the University of Manchester, there are additional options for housing that are referred to as purpose-built student housing (PBSA). These are well-appointed student residences that were created with both native and international students in mind. Let’s check out some of the best and most famous accommodations near Manchester University.

The Vita Circle Square, a premium private University of Manchester accommodation within the Vita-Students network, redefines dorm life for Manchester's students. The experiences you have at Circle Square will last a lifetime because of its waterfront living, stunning views, en suite bathrooms with private terraces, movie theatres, larger-than-ever social centres, and a variety of activities including motivational speeches, stand-up comedy, and energetic parties.

The University of Manchester and the Manchester Metropolitan University are both within a few minutes' comfortable walking distances from this home, making it the perfect choice for students who want to live in a calm, safe neighbourhood while yet having easy access to their colleges.

Residents of iQ Lambert & Fairfield House can select from a variety of room sizes, including elegant self-contained studios that offer private living or en suite rooms in roomy communal flats that sleep 5 to 11 people. Whatever option you select, you'll get plenty of living space, modern, comfortable furniture, and an abundance of storage in this University of Manchester accommodation.

If you're a student at the University of Manchester, Manchester Metropolitan University, or The Manchester College, iQ Lambert & Fairfield House puts you in a great location. A variety of utilities are available right on your doorstep just moments from Piccadilly Station, including shops and a variety of bustling bars and restaurants for those crucial evenings out.

iQ Wilmslow Park has been renovated to an exceptional level, making it a superior University of Manchester accommodation. The new entrance has a bright, spacious, and friendly atrium that is better suited to busy check-in days and frequent social gatherings.

Life At The University of Manchester

Manchester offers a flexible student experience that can be customised to your preferences. At the university and throughout the city, it's simple to immerse oneself in interesting activities and experiences. On-campus and in the dorms, there are a tonne of activities you may participate in to have fun, remain occupied, and meet new people. The cosmopolitan attractions of one of the most well-known cities in the UK, however, are never more than a quick bus trip away. The University of Manchester is big enough but close-knit enough to offer the best of both worlds: a campus community and city life.

Near the city centre, a sizable area is occupied by the campus. Grand Victorian and more contemporary structures predominate, but there are also quiet nooks, planted gardens, cafes, and common areas where you may unwind and spend time with friends. The majority of religions have places of worship at the institution. Manchester's strong, pioneering character endures today; however, its accomplishments now also include shaking up the music scene, nurturing artistic creativity, and hosting international sporting events. The uni is situated in the centre of Manchester, which was originally shaped by its success during the Industrial Revolution of the 19th century. Manchester is a city that is passionate about advancement and never willing to rest on its past accomplishments. It cordially invites you to join in on its vision and vibrancy.

Castlefield, a park commemorating urban heritage, is a great site to start your exploration of Manchester. A stroll through the well-preserved Victorian homes along the ancient canals or the rebuilt Roman Fort is a worthwhile use of time.

Explore the Bridgewater Canal thoroughly. It was built in 1761 to carry coal from the Worsley mines to Manchester. Offices, stores, hotels, and restaurants have been renovated from the numerous ancient warehouses that once lined the canal. It's highly advised to take a trip on one of the Bridgewater tour boats.

The oldest railroad station in the world is where the Science and Industry Museum is located. The Power Hall, one of its 12 galleries, houses historic made-in-Manchester automobiles, including a rare 1904 Rolls Royce, as well as water and steam-driven machinery from the height of the textile industry.

The Station Building has records of the city's history from Roman times through the Industrial Revolution and up to the present. Another important sight is the Air and Space Gallery. A. V. Roe's Triplane 1, the first successful British aircraft, is one of many historic aircraft on display here.

Also worthwhile is a trip to the Imperial War Museum North (IWM North), especially if you're interested in the background of warfare. This Imperial War Museum outpost, which was first opened in 2002, is well-known for its exhibits of military aircraft and vehicles.

The history of the battle and its impact on civilization are covered in video presentations and displays, which are highlights of a visit. There are also a lot of static exhibits of huge equipment, including tanks, aeroplanes, artillery, and handguns. On-site amenities include a store and a café.

The majority of Manchester Cathedral, which is located on the banks of the River Irwell and is officially known as the Cathedral and Collegiate Church of St. Mary, St. Denys, and St. George, dates from the years 1422 to 1506; it was elevated to cathedral status in 1847. Its chapels on either side of the nave and choir are very lovely.

It was constructed between 1486 and 1508, and later expansions and modifications were made virtually every century after that. The choir stalls are noteworthy because they contain some of the most elaborately decorated misericords in the nation.

FAQs - Accommodation near University of Manchester

What different accommodation types are available near University of Manchester?

Can I view hostel close to University of Manchester before booking?