26 places to stay
Sort by:
Relevance

Ipswich is a charming coastline town that is home to 5,000 University of Suffolk students. You can go shopping, explore historical sites, and even sail on a boat or a yacht if you live in Ipswich. Discovering this elegant town leaves students with a plethora of unique experiences especially when it comes to dining at Marina’s several restaurants. Ipswich, as a historical town, offers a number of things that you should see while residing there. It currently houses spectacular art galleries with some of the greatest collections outside of London.

Ipswich is also home to a number of prestigious institutions and colleges. The University of Suffolk is located in this city, and it is one of the top 130 institutions in the United Kingdom. Other prominent universities in Ipswich include Suffolk New College, Easton & Otley College, and Lowestoft College. Due to their convenience, freshers choose to live in student accommodation in Ipswich that is within easy reach of these universities.

You can find an array of popular student houses in Ipswich most of which are fully furnished and come with features such as a fully-equipped kitchen, a study desk & a chair, a private bathroom and beyond. Moreover, these student flats in Ipswich are conveniently located within the vicinity of public transportation making it easier for students to commute around the city. 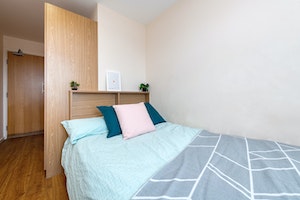 Selecting decent Ipswich student accommodation might be a time-consuming effort, but it is not impossible. Ipswich features a lot of low-cost student housing with uber-comfort at a fair price. Many world-renowned universities, including the University of Suffolk, the University of Essex, the University of East Anglia, City College Norwich, and Regent Cambridge, are located near student dormitories in Central Ipswich.

In Ipswich, you may find anything from elegant student housing to low-cost student housing. All of the student hostels in Ipswich are designed with the student’s comfort in mind. There is something for everyone in the city. Ipswich student accommodation is further subdivided into halls of residence, private halls of residence, and private housing. Private student lodgings in Ipswich provide comfortable, beautiful, yet affordable en-suites, studios, and communal flats that include all costs.

Ipswich City is a metropolitan city in Suffolk and one of the UK's oldest English county districts. Ipswich, founded during England's early warring and mediaeval history, is a picturesque hilly and mountainous territory that has long been an important economic sector in the United Kingdom. Ipswich is also bordered by famous cities such as London, Norwich, and Cambridge, making it a well-connected rural area of England.

Ipswich's architecture is a blend of early 19th and 20th-century styles, influenced by historical and present warfare. Local attractions in Ipswich, such as Framlingham Castle, the Ipswich Transport Museum, Berling Gap, and the Seven Sisters, are among the most popular historic sites, attracting thousands of visitors each year. Furthermore, the city is home to a large number of foreign students, who are drawn to Ipswich by its worldwide curriculum and promising job opportunities.

Universities provide outstanding amenities that are used by both domestic and foreign students. Ipswich’s universities, with their wide halls, also provide superb Ipswich accommodation for students. There is also sufficient provision for students who choose private Ipswich student accommodation. Off-campus, there's plenty for students to do, with fantastic nightlife options such as clubs and restaurants, and for those who want to explore a little further. Here you will discover information on UniAcco's private Ipswich student accommodation, including student houses in Ipswich and much more.

Best Places to Stay in Ipswich

UniAcco offers many options for Ipswich student accommodation. The locations of these private flats in Ipswich are very affordable and are located close to your university.

Cost of Living in Ipswich

This is an estimated budget while staying in an Ipswich student accommodation, prices might differ based on how much you spend daily:

Greater Anglia serves Ipswich, which has its main rail station on Burrell Road, a 10-15 short walk from the town centre or a short bus or taxi ride away.

A guided walk with a skilled guide is the greatest way to gain a sense of a location. Learn about the town's history and some of the personalities who have left their imprint throughout the years. Don't miss the 'Grandma' monument, which is based on the figure created by cartoonist Ronald "Carl" Giles. 'Grandma' glances up at the office window where Giles worked for many years as if expecting him to peak out and wave! From May to September, there are regular walks.

2. Sail Down The Orwell River And Enjoy The Views.

Make a journey along the picturesque River Orwell a priority on your "must-do" list. There are various alternatives, beginning with the bustling marina at Ipswich Waterfront. As you leave Ipswich, the environment changes abruptly as you sail under the magnificent Orwell Bridge and drift pleasantly along the river, passing through the scenic Shotley Peninsula.

3. Inspect the artworks at Christchurch Mansion.

Christchurch Mansion, built in the 16th century as a gentleman's town mansion, currently showcases an eclectic assortment of exhibits, including a superb collection of work by painters Thomas Gainsborough and John Constable. A huge chamber within the mansion, the Wolsey Art Gallery, also features a collection of Constable's goods, including his wife Maria's wedding band and his paintbrushes and palette. Inside, Christchurch Mansion has layers of varied rooms and collections, a beautiful china and glass gallery, and an intriguing collection of Victorian toys and games. The museum is free to enter, and there are several activities held on the grounds throughout the year.

4. Take A Walk Through One Of The Town's Beautiful Parks

Ipswich has various excellent parks, both in town and on the outskirts. They are animal sanctuaries and are ideal for having a stroll along their kilometres of pathways and around their beautiful lakes. Some boast breathtaking views, some hold year-round activities, and all offer a tranquil setting for a few hours of relaxation.

5. An Evening on the Ipswich Waterfront While You're Away

The lively waterfront is a hive of activity, with cafés, restaurants, luxury residences, the spectacular Suffolk University structure, and The Salthouse boutique hotel. Spend an enjoyable evening watching the yachts bob softly on the water, people-watching, and listening to live music at one of the bars.

What different accommodation types are available for students in Ipswich?

Can I get a furnished student room in Ipswich?

Can I get discounts for student accommodation in Ipswich?