10 places to stay
Sort by:
Relevance

Newport is a church and university city in southeast Wales. The city is built on the River Usk, which has played an important role in its development. Newport flourished greatly in the nineteenth century while the coal industry was growing; the city was the major port for the South of Wales until the development of Cardiff saw it become the main port city, resulting in a significant deterioration in the city's infrastructure. Harper Adams University, University of Wales and Coleg Gwent are some well-known universities in Newport. Finding student houses in Newport, located within the vicinity of these universities is a simple and hassle-free process. Studying in this city will provide you with amazing Newport student accommodation along with a fantastic social life.

The Caerleon Roman Fortification and Baths are one of Newport's most popular attractions. Here, you may explore the ruins of an ancient Roman fortress while learning about the fortress's and baths' historic past. The site also has a gift store and a restaurant, making it ideal for a day out with your pals; entrance is also cheap for everyone. The Newport Cliff Walk, which is 3 ½ miles long, is ideal for individuals who appreciate walking through beautiful scenery. There are a variety of student houses in Newport for students to choose from that are located close to the well-known attractions. 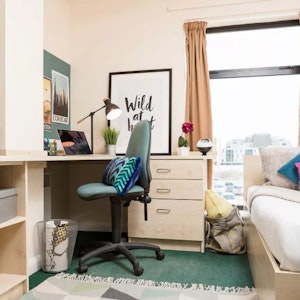 You can discover comfortable and modern student accommodation in Newport, allowing you to experience a welcoming and relaxed atmosphere throughout your time at university. There are lots of affordable student houses in Newport near various world-renowned universities such as the University of South Wales, Cardiff Metropolitan University, Cardiff & Vale College, and Trinity College.

Within a 20-minute walk, you can reach all of the major attractions, including the stunning university campus and some of the city's greatest restaurants and nightclubs. The city's population is mostly composed of students, resulting in a vibrant and cheerful atmosphere in relatively calm surroundings.

Newport is in the southwest of Wales. The University of Wales Newport is located here, as is a campus for The University of South Wales. Together, they contain at least 12,500 students, which is a sizable proportion of the Newport population, making student accommodation in Newport readily accessible. Newport is a beautiful port city and an important commercial bay area in the United Kingdom. Newport is also bordered by famous cities such as London, Cardiff, and Birmingham, making it a well-connected rural portion of England.

Many of Newport's nearby attractions, like Bute Park, Cardiff Castle, and Llandaff Cathedral, are prominent world heritage sites that draw thousands of people each year. Furthermore, the institution attracts a large number of international students, who are drawn to its worldwide class-studies programme and lucrative professional opportunities.

You can find a diverse range of student housing options accessible in Newport. Halls of residence, house shares, flats, and apartments are examples of these. UniAcco offers some of the best Newport accommodation near the top universities at reasonable prices. The off-campus student rooms are perfect for those who wish to maintain their privacy while having fun. Each of these apartments is equipped with a fully equipped kitchen, a smart TV, a bed, and an en suite bathroom. The city strives to be one of the best student-friendly cities in the world, with a thriving nightlife.

Even if you are not near your preferred university, student accommodation in Newport is within the vicinity of public transport like bus stops and railway stations. In other words, residences in Leeds are well connected to the most popular regions, and there are several transportation options.

Best Places To Stay In Newport

Newport Student Village, Howard Gardens, Ty Pont Haern, Blackweir Lodge, and Crown Place are just a few of the prominent areas to live in this city, all of which are close to the Newport City Centre. Understanding whether to opt between the university halls of residence or private student accommodation in Newport could be overwhelming initially. However, the downside of on-campus residences is that, when compared to private student housing, they fill up quickly and are more expensive. UniAcco caters to students by providing top-notch accommodation within a budget, most of which are located in close proximity to the top universities.

Cost Of Living In Newport

South Wales provides excellent value for money. Food, entertainment, lodging, and other day-to-day expenses are likely to be lower than in many other regions of the United Kingdom. So, if you remain in Newport, you could find it simpler to control your spending than in other locations. The cost of living in Newport is 40% more than the national average. However, this again significantly differs depending on the type of student accommodation in Newport, your location, how you commute, your meals & other essentials.

If you intend to study and live in Newport, there are some things that every student should keep in mind as they travel through the city. Because Newport is a port city, the city is cleverly connected to every major transit system in and out of the city, which is easily accessible from any university or student accommodation in Newport.

Train: Newport Railway Station is Wales' third busiest train station. So you don't have to bother about weekend trips to surrounding cities.

Bus: The bus network in Newport operates 24 hours a day, seven days a week, with over 100 buses travelling up and down the city. Students may board buses from Newport Bus Station, which is located in the City Centre, to all national roads that connect to the city. In Newport, the typical bus ticket is approximately 2-2.50 per day. You may also purchase an 'Oyster Card' bus pass, which significantly decreases local transportation costs.

Cycling: You can also take your bike from your student accommodation in Newport to explore the city's neighbourhoods. You may cycle through Newport's special cycling zones such as the Caldicot and Wentloog Levels, the Newport Wetlands Reserve, and the iconic Arch Foot Bridge.

The lovely 3.5-mile Cliff Walk in Newport is ideal for a peaceful hour. On one side, there are panoramic ocean vistas, crashing waves, and just the right amount of sea wind, while on the other, there are gorgeous Gilded Age houses.

Newport's 10-mile beachfront drive is a must-see! Drive or ride your bike through the twisting trail to see the lovely coastline and parks.

From Fort Adams State Park, you can get to see Newport Harbor as well as the East Passage of Narragansett Bay in a panoramic view. The park provides a variety of activities such as saltwater swimming, fishing, boating, soccer, and rugby.

The Newport Art Museum was created in 1912 with the concept that arts and culture have the capacity to bring various groups of people together, promoting civic participation and strengthening the social fabric of our communities.

What different accommodation types are available for students in Newport?

Can I get a furnished student room in Newport?

Can I get discounts for student accommodation in Newport?