Newcastle under Lyme, a historic city, offers a wealth of possibilities to enjoy both mediaeval heritage and thrilling cultural and sporting activities. So, whether you prefer sports, art galleries and exhibits, strolling through the famed Newcastle market, or simply stopping by the pubs and bars for a pint on the weekend, the city has something for everyone. When going out on the weekends or attending shows, plays, or music performances after class, the lively and youthful environment can be felt. NSCG Newcastle College, Keele University and NSCG - Stafford College are some of the top universities in the city. Finding student houses in Newcastle under Lyme, located within the vicinity of these universities is a simple and hassle-free process. Studying in this city will provide you with amazing student accommodation in Newcastle under Lyme along with a fantastic social life.

The city's diverse student population makes it an excellent spot to form lifelong friendships with both British and international students. Newcastle under Lyme has become a popular student destination since its small size allows for a close-knit student community while also providing enough cultural opportunities for you to never get bored. There are a variety of student flats in Newcastle under Lyme for students to choose from that are located close to these attractions. 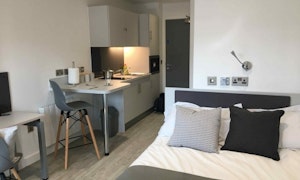 Student Accommodation in Newcastle Under Lyme

About Newcastle Under Lyme

Newcastle under Lyme is a town in Staffordshire, a historic county in west-central England. It is located in the northwestern region of Staffordshire, bordering the city of Stoke-on-Trent. Newcastle-under-Lyme gets its name from Ranulf de Gernons, 4th Earl of Chester, who built a new castle in the Lyme Forest around 1145. During the Tudor period, the castle became obsolete. In 1173, the town acquired its first royal charter of the organisation.

Best Places to Stay in Newcastle Under Lyme

UniAcco offers many options for Newcastle under Lyme student accommodation. The locations of these private Newcastle Under Lyme accommodations are very affordable and are located close to your university.

Cost of Living in Newcastle Under Lyme

The National Coal Mining Museum of England is located at Caphouse Colliery in Overton, West Yorkshire, England, near Wakefield. It first opened its doors in 1988 as the Yorkshire Mining Museum, and in 1995 it was given national status.

Alton Towers Resort, sometimes known simply as Alton Towers, is a theme park resort in Staffordshire, England. It lies in the parishes of Denstone and Farley, near the hamlet of Alton. The Merlin Entertainments Group-operated resort includes a theme park, water park, spa, mini-golf, and hotel complex. Alton Towers grounds, which were formerly a private estate, were opened to the public in 1860 to earn cash for the estate.

Trentham Estate, in the village of Trentham, is a visiting attraction in Staffordshire, United Kingdom, on the southern outskirts of the city of Stoke-on-Trent.

In Australia, Canada, New Zealand, and the United Kingdom, the New Year's Honours are revealed on or around New Year's Day. The dates differ from year to year and nation to country. All are announced in supplements to the London Gazette, and many are awarded by the king sometimes following the announcement, especially for those on active duty. This article contains the prizes announced in the New Year's honours lists for 2002.

Drayton Manor is a theme park resort and zoo located near Drayton Bassett, Staffordshire, England. The park has 280 acres, of which around 113 acres are used, and attracts approximately 1.5 million visitors each year.

Student Housing in Newcastle Under Lyme

How do I find Student accommodation in Newcastle Under Lyme?

How much rent does a student pay for accommodation in Newcastle Under Lyme?

Can I stay with a friend at my student accommodation in Newcastle Under Lyme?