68 places to stay
Sort by:
Relevance 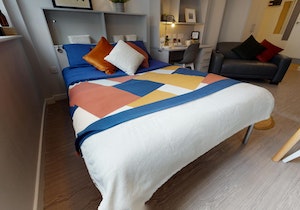 For those students who plan on joining the University of Sheffield, there are plenty of student accommodation options available. You can choose from a broad range of budget-friendly yet luxurious student flats, halls of residences, studios, ensuites, and beyond! Regardless of whether you stay on-campus at the University of Sheffield accommodation, or at a private residence, there’s so much in store for you to do in the city.

About The University Of Sheffield

Sheffield University is located within the vicinity of Conduit Road. The city is located in the heart of England, with adjacent airports such as Manchester, Robin Hood, and East Midlands linking it internationally and domestically. It is accessible by car and train, with two trains every hour departing from London. It was chosen the happiest city and the friendliest city, maybe because of its vast number of microbreweries, which is the largest number per head of population in the world.

Most of the accommodation near the University of Sheffield is well linked to transport services. Depending on the distance from your residence to the institution, you can either walk, or commute by bike, bus, tram, or train. They are easily accessible and connect you within the city as well as to the other major cities in the UK.

Sheffield has two bus connections (bus terminals), one on Arundel Gate and the other on Pond Street. Buses take between 10 and 20 minutes to go from accommodation near the University of Sheffield to the University.

Tram & Train -  Stagecoach operates Supertram, the tram network in Sheffield and Rotherham. The University of Sheffield has a tram station on Upper Hanover Street, which is only a short walk from most of the important campus buildings.

Local Train - The Northern operates Sheffield's local rail service. It reaches out beyond the city's outskirts and into the remainder of South Yorkshire. Manchester, Leeds, and Lincoln are among the other cities.

Best Student Accommodation At The University Of Sheffield

The city of Sheffield consists of a mix of suburbs, most of which emerged from the neighbouring communities. These were specially incorporated into the city as it developed as a result of the Industrial Revolution and the expansion of the steel industry that followed. The “urban village vibe” of independent businesses and craft food establishments may be found in modern-day Sheffield suburbs.

Life At The University Of Sheffield

There are several buildings on campus, as well as various faculties and departments. The Octagon Center was built near the university in 1983. It is well-known as a conference and music venue hub. The site houses the Department of Plant Sciences and Biology, a museum, and the Arts Tower. Furthermore, the Western Bank Library is well-known for its extensive collection of books and research materials. This library has a collection of over 25,000 rare books and over 150 special documents.

The Faculty of Engineering was established in 2015. It has laboratories, theatrical lectures, and workshop classes. The St. George church was also erected on campus, making it the first campus to have one. It was later converted into a lecture hall in 1994. Undergraduate and postgraduate degree programmes are available at the university. The academic structure is known to have a huge list of courses that are divided into various departments and faculties.

The Faculty of Science, Faculty of Arts and Humanities, Faculty of Social Sciences, Faculty of Engineering, and Faculty of Medicine and Health are the five faculties in which the topics are divided. In addition, an international faculty known as City College, which is situated in Greece, is involved in the curriculum. The University of Sheffield has 55 academic departments and offers undergraduate and postgraduate programs with a total of 29,666 students enrolled.

Students living at the University of Sheffield accommodation usually get involved in volunteering & community service activities. That aside, there are other activities like filmmaking, Engineers Without Borders, fashion, faith organisations, Sheffield Entrepreneurs, Natural History, Dance, DJing, Sports, and more with over 350 Clubs and Societies.

The University of Sheffield is one of the best institutions in the world; it is reasonably priced for overseas students, with tuition fees ranging from 17,600 to 36,000 GBP per year, depending on the field of study. According to the ‘Which University Guide 2018-2019’, 96 percent of University of Sheffield alumni are employed or enrolled in further education within six months after graduation.

Sheffield is ranked amongst the most affordable cities in the UK to live in. This makes it easy for students to save up enough money from their budget and visit places. It is a large metropolis with a strong sense of neighbourhood. On the outskirts of the Peak District National Park, there is a cultural centre. Its scenery, people, and culture will have a far greater impact on you than you might think. Whether you’re after a bit of culture or just having fun and games, there’s nowhere better to live than at a University of Sheffield accommodation.

The Millennium Gallery is a well-known art gallery in Sheffield. It is conveniently positioned in the city centre, making it simple to reach, and admission is free for guests. The gallery has a range of permanent collections as well as temporary display spaces, so there is always fresh culture to discover.

Endcliffe Park, which includes both forest and parkland, is one of Sheffield's numerous green areas. It first opened in 1887, and there is a historical pavilion near the entrance. There are a variety of memorials and memorial buildings in the park, as well as a playground for children, an outdoor gym, and a parkour training area, all of which are free to use.

Sheffield City Hall, located in Barker's Pool, is one of the city's historical landmarks. The monument still bears the scars of a WWII bomb that exploded in the square. The Hall is now a venue for events and performances, and it houses Sheffield's biggest organ.

Weston Park is a major green space in the city that is conveniently located in the heart of the city. The park contains a wide range of floral displays as well as late-nineteenth-century buildings. The park, which has just been refurbished, is a lovely location to relax. While you're there, don't forget to stop by the Weston Park Museum.

FAQs - Accommodation near University of Sheffield

What different accommodation types are available near University of Sheffield?

Can I view hostel close to University of Sheffield before booking?