12 places to stay
Sort by:
Relevance 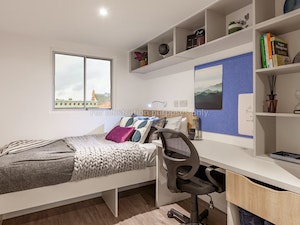 Finding student accommodation near the University of Exeter is quite simple because the University lies right at the heart of the city. Several students go to this beautiful city to pursue their ambitions and become successful. While there are numerous University of Exeter accommodation options in the city, some of the most popular housing types include budget-friendly halls of residence, studios, student dormitories, shared houses, and economical private houses (PBSA).

Within a 20-minute walk from your private student accommodation in Exeter, you can reach all of the major attractions, including the stunning university campus and some of the city's greatest restaurants and nightclubs. The city's population is mostly composed of students, resulting in a vibrant and cheerful atmosphere in relatively calm surroundings.

About The University Of Exeter

Exeter University is a public research university in Exeter, South West England. It is a member of the Russell Group of UK institutions, and it excels in both teaching and research. It was established in 1955, although its roots may be traced back to 1838 when there was a demand in the city for a technical education centre. Not only can you find great accommodation near the University of Exeter during your study but you also have several career opportunities post-graduation. It offers undergraduate and postgraduate degrees to 23,613 students under the supervision of 3,145 renowned faculty members from all over the world, making it one of the most globally diversified universities in the world. Every year, the University of Exeter attracts up to 15% of its overall student population from other countries. Furthermore, the institution has been named one of the best in the country for the quality of its research outputs and relevant courses.

The University of Exeter is structured in such a manner that every significant area of the campus connects to one or more local transit systems. The main building of the University is situated on Stocker Road, which is well-known for its massive retail centres and malls, food courts, cafés, bars, pubs, and theatres. The university is a ten-minute bus ride from the city centre, with rapid transit between the two places. Because Exeter's city centre is so compact, walking or cycling throughout the city is a delight.

The University's main building is located within walking distance of most of the popular landmarks. If you’ve decided to stay at the University of Exeter accommodation, it’ll be easy for you to reach out to the city centre. For first-year students, it is recommended that you check local railway officials and obtain a discounted 'Exeter PlusBus' Pass, which is an electronic ticket that operates on the underground system, buses, and some overground train lines.

Best Student Accommodation At The University Of Exeter

There are several alternatives for students when it comes to deciding where to live in Exeter. St Leonards, which has a village ambience and sought-after schools, and Exeter Quayside, which boasts loft-style flats with river views, are two of the most popular student areas in Exeter. Because both of these places are just a 10-minute walk from the city centre, rental rates may be rather high. However, with the help of UniAcco, you can save a substantial amount of money on all sorts of accommodation near the University of Exeter.

Life At The University Of Exeter

The University of Exeter has a student body of around 25,263 students from more than 130 countries. The administrative and academic operations of the institution are separated into six colleges. A variety of research centres and institutes are located on the grounds.

The Streatham Campus of the University of Exeter is located in Exeter. St Luke's Campus is in the heart of the city. Because of its setting in the heart of the stunning Devon countryside, Exeter is consistently recognised as one of the best places in the UK to live, work, and study. It's a booming autonomous industry in a vibrant, lively metropolis.

The University has four campuses: Exeter's Streatham and St Luke's, along with Cornwall's Penryn and Truro. There are over 200 student organisations on campus, including creative writing, theatre, Socialist Student Societies, Poker Society, and Conservative Future Society. The athletic union at the university is responsible for overseeing and regulating all sports activities in a fair and active way. The organisation is in charge of approximately 50 sports organisations with a total membership of over 5,000 students.

Dartmoor has a mystical aura that only a few other sites can match, with its granite tors and wide moorland. It's simple to get to Dartmoor from accommodation near the University of Exeter: a short drive or one of the frequent bus connections to numerous towns and villages dotting the region. There are prehistoric standing stones and Bronze Age hut circles to be found, as well as a number of the best pubs.

This National Trust property is located just outside of Exeter, and the grounds host the Beautiful Days music festival every year. You can tour the house and grounds, and the Trust hosts a number of events throughout the year, such as farmer's markets, classic car shows, and nature-themed courses.

If Devon has one thing in spades, it is undoubtedly its tremendous natural beauty. The Jurassic Coast, which begins in neighbouring Exmouth and extends to Swanage in Dorset, is a World Heritage Site. Its high, rocky cliffs, has been named the fifth-greatest natural marvel in Britain, reflecting 180 million years of history.

This was the last castle in England to be built completely of granite, with its construction that was eventually completed in 1930. Drogo is a completely unusual castle, with design elements drawn from castles from the mediaeval through Tudor periods, combined with modernist methods of the time. Its lovely formal garden is filled with magnolias, rhododendrons, and roses that stand out against the bleak Dartmoor environment.

The aquarium in Plymouth is the largest in the UK, and if you don't want to drive, you can take the train from St. David's, which is just a short distance from our bed and breakfast. The aquarium features marine life from Plymouth Sound, the Atlantic, and the Great Barrier Reef. Make sure to attend the shark feedings and informative sessions to have a better understanding of these wonderful creatures.

FAQs - Accommodation near University of Exeter

What different accommodation types are available near University of Exeter?

Can I view hostel close to University of Exeter before booking?