7 places to stay
Sort by:
Relevance 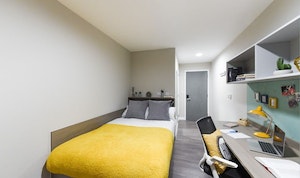 Swansea University is located in the centre of Swansea, Wales. As a result, locating Swansea university accommodation will be simple. Hundreds of thousands of students go to this lovely metropolis to pursue their ambitions and become successful. While there are numerous student housing options in the city, some of the most popular housing types include budget-friendly halls of residence, studios, student dorms, shared rooms, and economical private houses (PBSA).

One of the most exciting aspects of entering university is moving into your student residence. The university's residence halls provide a secure and pleasant environment to return to after a day of study, with lots of opportunities to make yourself at home.

Swansea University presently has two campuses: Singleton Park and Bay Campus. The Swansea campus is located on Singleton Park and is only a 7-minute walk from the Swansea City Centre, making it very convenient for students to go throughout the surrounding regions. The city is well-known for its extensive Swansea Transportation Council network, which connects all areas of the city, including Swansea University. Swansea's public transportation system is separated into zones that cover all of the city's popular areas where you can also find excellent Swansea University accommodation.

Swansea University's main campus contains the main building on Singleton Park, which is an easy commute from the city. The central portion is located within walking distance of the most popular tourist sites. It is recommended that first-year students check with local railroad officials to obtain a discount. Swansea PlusBus Bus pass is an electronic ticket that may be used on the underground, buses, and some overground train routes.

Swansea University is structured in such a way that every core feature of the university building connects to one or more local transportation systems. The main structure of the University is located on Singleton Park, which is well-known for its massive retail centres and malls, delectable food courts, cafés, bars and pubs, and theatres. As a result, it is typical to feel energised by the vibrant and fun-loving environment of this section of Swansea and to mix up and enjoy this new attitude.

Because there are so many places to stay in Swansea, finding the proper Swansea University accommodation can be difficult. The most challenging decision for students is to decide whether to live on or off-campus.

The disadvantage of on-campus living is that it may be costly, and room availability might be an issue. On-campus housing, on the other hand, is quite near to school, which is a huge benefit for students. Off-campus housing, on the other hand, is less expensive and offers more services and amenities to students than on-campus living. Students in Swansea can also pick from a range of off-campus living choices. UniAcco lists great Swansea University accommodation, some of which are as follows -

Swansea University is situated in Swansea, Wales's second-largest city, which is well-known for its vibrant cultural scene. Swansea University is a popular choice for overseas students due to its stunning waterfront campuses. Swansea Institution's two campuses have been awarded the coveted Green Flag Status Award, making them the first and only dual-campus university in Wales to do so. Swansea University, one of the country's most research-intensive universities, has witnessed a 70% growth in research income over the previous ten years.

Swansea University admits students in a number of intakes throughout the year, with different deadlines for its diverse range of degrees. It is a top and notable university among several across the world that have been ranked by organisations such as the QS World University Rankings, THE, ARWU, and others.

The university's employability academy supports students in applying their knowledge and talents in the actual world while also enhancing their soft skills. It organises a range of activities to involve students, graduates, and employers, as well as to build networks among them so that students may seek advice and alumni can share their expertise.

Swansea, Wales' "City by the Sea" and the birthplace of Dylan Thomas, is a booming maritime city and regional retail centre in a gorgeous setting, as well as the home of Swansea University. If your Swansea University accommodation is located within walking distance from the city centre, you can find loads of attractions around you.

A short distance away, the Victorian village of Mumbles has a pier, classic boutiques, artisan stores, and ice cream parlours: Mumbles is recognised as the Gateway to Gower, Britain's first designated Area of Outstanding Natural Beauty. The Gower Peninsula stretches west of Mumbles in a series of breathtaking coastal and agricultural landscapes. The Waterfall Country at Afan and the Vale of Neath to the east are a sanctuary for hikers and bikers alike.

Swansea has a rich music scene that is only growing. The city boasts a broad selection of music venues and holds music festivals and concerts throughout the year, with plans for a new 3,500-seat arena in the city's centre in the works.

Swansea is a vibrant cultural and creative centre. Visit Glynn Vivian and Mission Gallery in town, as well as Taliesin Arts Centre and the Egypt Centre on campus, during wet days. Literature enthusiasts might also pay a visit to Dylan Thomas's home.

The beauty of Swansea is that the majority of the city's (and seaside's) attractions are within walking or bike distance of the Swansea University campuses. If it's raining or if yesterday was a "leg day" at the gym, take a blue Unibus. They run seven days a week, and a season ticket includes free transit between Swansea and Cardiff.

Wind Street is a student's dream come true. Get cocktails in a speakeasy-style Prohibition or beverages from Flickering Light, a 1950s truck-turned-bar. No Sign Wine Bar has a long and illustrious history (Dylan Thomas notably drank there). You may head to No.6 for burgers and daily changing beers. Just outside the centre, Uplands has heaps of student favourites. Fun, friendly Noah’s Yard features a daytime café and gallery as well as a bar. Uplands Tavern is the place for live music – and outdoor summer drinking.

What different accommodation types are available near Swansea University?

Can I view hostel close to Swansea University before booking?