30 places to stay
Sort by:
Relevance 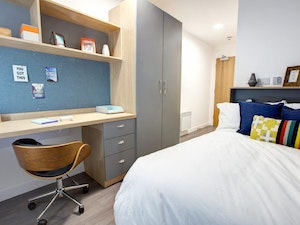 Aberdeen, Scotland's safest college town, is a pleasant city with a range of quality student housing in Aberdeen. So, if you are a university student seeking Aberdeen University accommodation or private student flats in Aberdeen, don't worry. Aberdeen student accommodation caters to students' living needs, ranging from budget-friendly student Halls of residence to dormitories to low-cost private housing choices.

About University of Aberdeen

The Institution of Aberdeen, founded in 1495, is a public research university in the port town of Aberdeen, Scotland. The University was formed when Scottish bishop and political leader Elphinstone, Chancellor of Scotland, persuaded Pope Alexander VI to establish King's College on behalf of James IV, King of Scots, the world's third oldest university in Scotland and the fifth oldest in the United Kingdom. Later, in 1860, the University of Aberdeen was established as a consequence of the amalgamation of Marischal College and King's College. The University of Aberdeen serves over 15,000 students from over 120 countries and provides both undergraduate and postgraduate programmes in a variety of topics, the most well-known of which being Engineering and Science. Students who plan on studying at the university have many options to choose from at the Aberdeen University accommodation options off-campus, as well as, off-campus.

Aberdeen is well-served by trains from all over England, Wales, and Scotland. Local rail services, routes, and ticket purchases may be found on ScotRail and London North Eastern Railway.

If you prefer to travel by bus and are in the UK, there are regular coach links to Aberdeen from a variety of places. Travelling by bus often takes longer, but it may save you cash when compared to train costs or rental vehicle pricing. Coach connections and pricing are available via National Express.

You can find many stay options at the Aberdeen University accommodation. The campuses and city centre are all within walking distance of these university residences. However, because these student halls are limited in number, most students choose private Aberdeen University accommodation or homestays nearby. You have the option of staying in one of the numerous student residences located within walking distance of the campus. All of the lodgings provide a high level of security, comfort, and value for money. They are self-catering University of Aberdeen accommodation with a properly equipped kitchen at your disposal. UniAcco will assist you in finding the best ones that will fulfil all your needs.

Let’s see some of the Aberdeen University accommodation listed below!

Life At University of Aberdeen

Aside from culture, academics, history, and tradition, the student experience at the University of Aberdeen offers a variety of recreational alternatives, including student-friendly bars, a diverse selection of museums and galleries, sports, and theatres. The University of Aberdeen delivers government facilities and learning tools to its students. The Sir Duncan Rice Library, which has over a million volumes and online resources, is one of the greatest and biggest on-campus library services in the United Kingdom. The campus also has individual and group study areas, as well as assistive technology booths. Students can also visit the Aberdeen Aquatics Centre and Sports Village.

The Cathedral Church of St. Machar, also known as St. Machar's Cathedral, is said to be built on the site of a minor Celtic church built by St. Machar in AD 581. The subsequent cathedral was founded in 1136, but the current structure comes from the 14th century and was finished in 1552.

2. The University and King's College of Aberdeen

King James IV granted the University and King's College of Aberdeen their charter in 1494 in what is today known as Old Aberdeen. The college's massive tower (1633) and a beautiful stone dome, the only intact building of its sort in Scotland and renowned for the stone model of Charlemagne's imperial crown that rests above it, are distinguishing characteristics. The chapel's original 16th-century oak choir seats and wooden ceilings have been maintained, as have images of the Stuart rulers carved in wood.

Aberdeen is also known as the home to the Brig O'Balgownie, one of Scotland's most famous romantic landmarks. This magnificent stone bridge, sometimes known as the Bridge of Don, is accessible through a short stroll through Seaton Park. Built under Robert Bruce's instructions around 1320 and renovated in 1607, it functioned as the principal crossing point for the River Don. Lord Byron, who briefly attended school in Aberdeen, alluded to the single-span bridge favourably in his satirical poem, Don Juan.

Evidence of Aberdeen's original mediaeval town may still be found around Castlegate, which is still the city's centre point centuries later. While there is no longer a castle here, the tower of the 17th-century Tolbooth, which was previously the town hall and jail, is Aberdeen's oldest building and now houses a museum with intriguing exhibits on the evolution of crime and punishment.

The Mercat Cross is located in Castlegate, opposite corners of the Tolbooth Museum, and is ornamented with a white unicorn. The city's merchant guild created this magnificent and richly adorned mediaeval sign of Aberdeen's privilege to host a market in 1686. A stairway in the structure's centre was used to broadcast news of freshly crowned monarchs to assembled people from its roof. Portrait medallions depict the heads of the ten Stuart rulers, from James I to James VII, as well as Charles I, Charles II, and Mary Stuart.

FAQs - Accommodation near University of Aberdeen

What different accommodation types are available near University of Aberdeen?

Can I view hostel close to University of Aberdeen before booking?