Cost of Living in Nottingham for Students [Updated 2022] 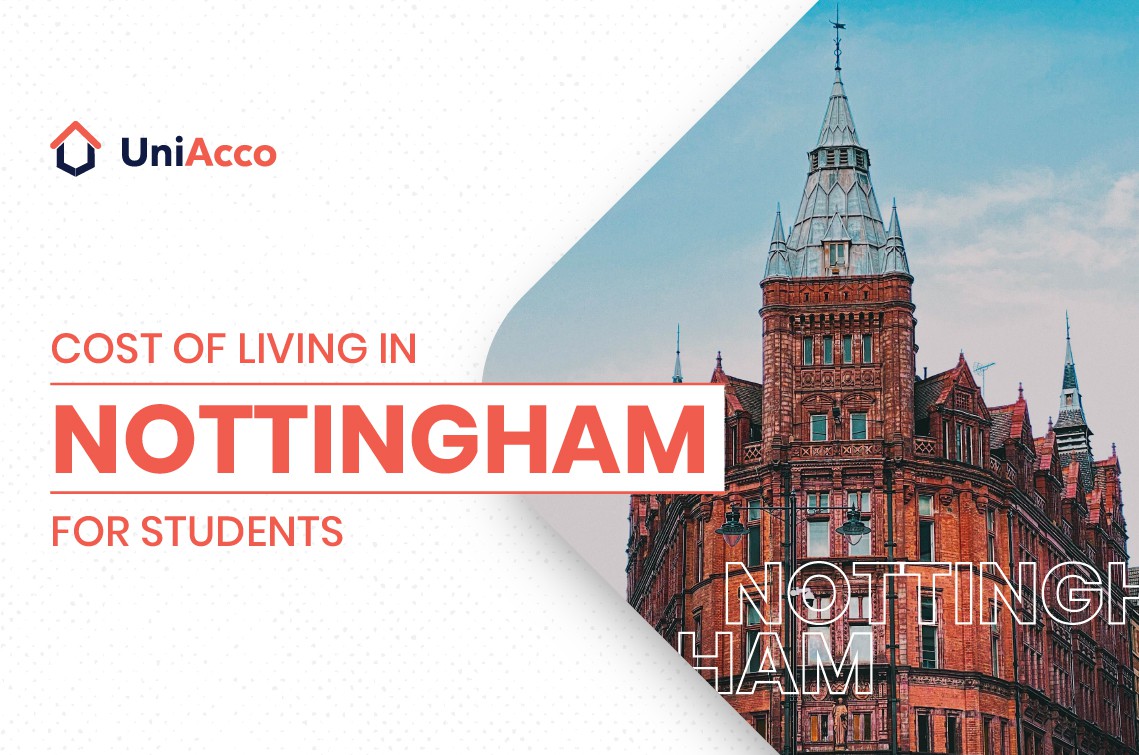 What Is The Cost Of Living In Nottingham?

The Cost of Living in Nottingham is quite close to the UK average. Check out the monthly breakdown of important living costs in Nottingham –

It is advisable to have a monthly budget of around £1,000 (without tuition) to live comfortably in Nottingham.

What Is The Average Rent In Nottingham?

Through UniAcco’s platform, you can get yourself a spacious en-suite room or student houses Nottingham, with all the latest and modern amenities for only £516 a month. Check out our website to know more.

Where Can I Find The Best Student Accommodation in Nottingham?

Get a taste of luxury living in Nottingham with iQ NewLand House. This student accommodation in Nottingham offers a wide range of studio rooms and two-bed apartments. Irrespective of your room choice, you can expect a WiFi connection, a bed and a wardrobe in every room. Communal amenities at iQ NewLand House include social events, a garden, a communal area, a study area, contents insurance, a CCTV security system and 24/7 dedication. What’s more, Nottingham Trent University and the University of Nottingham are just a few minutes away. With iQ NewLand House offering so much, we bet you think that the price tag is a bargain!

If you have a balanced budget, then we recommend you go for iQ NewTown House. Their studio rooms have a premium feel to them but don’t carry the back-breaking rent rates. You get all your basic in-room amenities like a bed, a study desk & chair and a WiFi connection in every room. Students can also make use of the communal amenities like the on-site gym, social events, the theatre, the communal room, the study area, 24/7 dedicated service, CCTV security system and much more. Take a virtual tour of iQ NewTown House on our website.

Get the best bang for your buck at iQ Exchange. This unique student accommodation offers en-suite rooms, studio rooms and even two-bed apartments! iQ Exchange student accommodation is perfect for students of the University of Nottingham and Nottingham Trent University. Many young students try their best at securing iQ Exchange months in advance, and it’s not surprising to know why. iQ Exchange, Nottingham offers fully furnished rooms and amazing communal amenities such as a common room, a laundry room, bike storage, social events, contents insurance and much more.

What Is The Cost Of Tuition In Nottingham?

Close to 62,000 students attend the three most popular universities in Nottingham –

The average tuition fee for undergraduate students in Nottingham is around £14,570, which is cheaper than most cities in the UK. Furthermore, Telegraph, recently named the University of Nottingham as the second-cheapest institution for studying in the UK, with an average total weekly spend of approximately £180. So, if you’re thinking about studying in Nottingham, go ahead with it. You’ll be spending much less than students in other cities in the UK.

What Is The Cost Of Transportation In Nottingham?

Prior to 2015, the public transport system of Nottingham won several awards for its largest publicly owned bus network in England. The government has invested heavily in upgrading and modernizing the transport system which has led to the re-opening of the Robin Hood Line and the construction of a light rail network, Nottingham Express Transit. Students who wish to study in Nottingham should strongly consider getting a monthly public transport pass for £57.

What Is The Cost Of Food And Other Necessities In Nottingham?

There are several hundred restaurants in Nottingham that serve dishes from all over the world. But don’t be tempted to eat out on a daily basis. Preparing your own food will help you save on a lot of money. Here is a rough breakdown of the cost of basic food in Nottingham –

What Is The Cost Of Entertainment And Recreation In Nottingham?

Nottingham hosts several multicultural events all throughout the year. The city has hosted an annual Asian Mela every year in summer since about 1989. There’s also the parade on St Patrick’s Day, fireworks at the Chinese New Year, Holi in the Park and several Sikh events.

There is truly no end to entertainment opportunities in Nottingham. Use your free time to explore all the entertainment hubs in the city – Victoria Centre, Broadmarsh, Lace Market.

Here are some costs associated with entertainment and recreation in Nottingham.

Is living in Nottingham expensive?

According to a recent study by TotallyMoney, Nottingham is the second cheapest city in the UK for student living costs. In order to rank universities, this was based on eight crucial living parameters such as rent, the cost of a taxi, the cost of a pint, and more. Nottingham’s cost of living is quite close to the UK national average.

Does Nottingham have a good student life?

Nottingham is a vibrant, multicultural city rich in history. Living in Nottingham provides you with first-class shopping, fantastic sports facilities, and distinct local culture. The city is also well-known for its safe, diversified, and entertaining nightlife.

Is Nottingham safe for international students?

Nottingham is known to be safe and student-friendly. Hence, living in the city will provide you with a plethora of unique experiences. With the University of Nottingham holding a strong reputation, you will find a huge number of international students in and around this city.

What is a good price for student accommodation in Nottingham?

Approximately, student residences in Nottingham start from around £150 a week or £600 a month. However, the rent largely depends on the location. If your housing is located in or within the vicinity of the city centre, it could be more expensive when compared to the rest of the city.

← Prev: What Happens To My Student Loan If I Drop Out From The UK? Next: Steps To Cope With Homesickness →
You might also like

What Is An Actuary? Definition Explained

Actuaries use datasets from the present & past to solve real-world challenges. A large part of an actuary's job is risk management, which...

END_OF_DOCUMENT_TOKEN_TO_BE_REPLACED

Studying in a city like Coventry is an experience of its own. With the world-renowned Coventry University that is the driving force behind the...