18 places to stay
Sort by:
Relevance

Vancouver is a prominent coastal city in British Columbia, Canada's westernmost province. The city has continuously been regarded as one of the world's most liveable cities due to its gorgeous landscape, multicultural culture, great job rate, low crime rates, and student-friendly resources. The University of British Columbia, Simon Fraser University, University Canada West, and Langara College are among the top-ranked universities in Vancouver that are popular with overseas students. Because students from all over the world travel to Vancouver to further their education, student accommodation in Vancouver is accessible in a range of styles that provide students with both affordability and convenience.

In QS World University Rankings' Best Student Cities for 2017, Vancouver was placed sixth in terms of students and overall desirability. It is no surprise then that locating accommodation for international students in Vancouver near their universities is easy. There are multiple residences that are fully furnished and stacked with facilities and amenities keeping students’ convenience in mind. Students can explore and choose from a host of housing options in Vancouver including studios, ensuites, flats, shared apartments, and more. 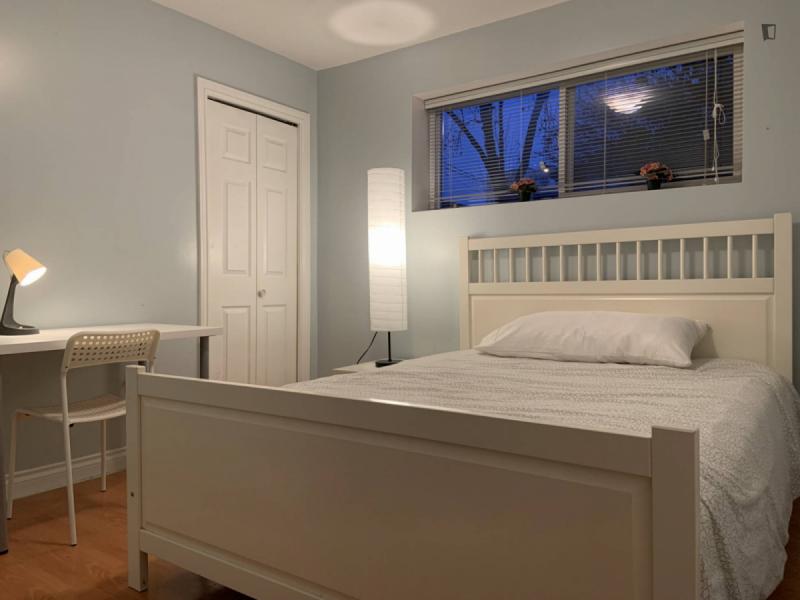 Many students from all over the world move to Vancouver each year to pursue their higher education. Some of the most prestigious and well-known universities are located in the city, and the majority of them offer students the option of living on campus in the residence halls. However,  there is an issue with the ease of availability of these rooms since they tend to fill up fast and these university dorms are more expensive. There are various off-campus Vancouver rentals for students that are close to the institutions and reasonably priced to make it easier for international students.

Student accommodation in Vancouver comes in a variety of styles, with some located near the city centre giving students access to everything they need and with a few others conveniently placed near the public transit network system. Keeping the students’ comfort & convenience in mind, UniAcco offers student housing in Vancouver - each tailored to their tastes, preferences and budget. These housing options include everything from opulent, fully equipped properties to cost-effective, modest apartments. These are some of the best on the market for students, with completely furnished rooms that are stacked with features and facilities. Some of the top housing options at UniAcco include - Beatrice St, W 42nd Ave, Richards St, E 58th Ave, Granville St, and more.

Vancouver is the largest city on Canada's West Coast, located amid stunning natural surroundings. There will never be a dull moment in this city, with a British history looming in its corners, an East Asian feel, and a diverse blend of nations. According to the New York Times, Vancouver is "the Manhattan with mountains.  It's a liquid city, a tomorrow city, equal parts India, China, England, France, and the Pacific Northwest. It's the cool North American sibling." Top universities and colleges in this city provide programmes that combine theory and practice. The city is recognised as a programming hotspot and is ideal for students who are interested in information technology.

Vancouver welcomes overseas students from all around the world. Around 10,000 international students study at the city's institutions. It is proud of its diverse population, making it one of the most hospitable places for students wishing to study abroad. It is easy to find excellent student accommodation in Vancouver located near its top universities.

Finding cheap accommodation in Vancouver for students may seem daunting or overwhelming at first. However, with several housing options available right near the university, it has become easier today to find their ideal student accommodation in Vancouver. Students may pick from a range of room options based on their budget and location, including student studios, student flats, shared and en-suite apartments, and student apartments. All of these units are completely furnished and have cutting-edge facilities such as a common area, gaming zone, study room, card-operated laundry, pool table, television, bike storage, and more.

Students can pick their choice of Vancouver accommodation at UniAcco with rooms starting from as little as CAD 500 and going up to CAD 1300 per month. All utility bills are included in the rent and students even have the option of using the ‘Compare’ feature in order to compare up to 4 properties at once and make their housing choice accordingly. Along with housing expenses, there are many more factors that impact a student’s cost of living, however, rent happens to take up a large portion of the amount. It is therefore important to choose the right student accommodation in Vancouver that suits both preferences & budget.

Best Places To Stay In Vancouver

Mesmerising beaches, breathtaking parks, low crime rates, unique architecture, public healthcare system, and more are a few of the factors that attract students from all over the world. There are several student-friendly areas that offer houses for rent in Vancouver for international students. Students can either opt to live in the city centre, near their universities or in more affordable areas that are well-connected to public transportation. Some of the most popular areas in Vancouver include -

Cost Of Living In Vancouver

Vancouver has been ranked one of the world's most livable cities. It is one of the greatest places in Canada to live and work in, although it may be pricey if students do not budget well. Students should be aware, however, that many activities are free, and there are amazing offers everywhere, making living and working in Vancouver an excellent combination of work and recreation. Most students rent a room, share it with friends, and split the payments! That is the most common way for students in Vancouver to manage their rent costs in Canada. Leaving aside the cost of student accommodation in Vancouver, here is a list of monthly costs that students in Vancouver might anticipate -

Public transport in Vancouver is easily available & accessible, safe, clean, and most importantly easy to navigate. Upon arriving at YVR airport, it is recommended that students get a Compass Card. Additionally, a monthly pass that will cost anywhere between CAD 98 to CAD 177 would be of great use to students. Due to the multiple transport options available, it is easy to commute to and from the student accommodation in Vancouver. Vancouver’s modes of transport are all operated by TransLink Metro Vancouver’s regional transportation authority. Some of the most frequently used means of transport in the city by students are -