9 places to stay
Sort by:
Relevance

Preston voted the finest location to live in the UK, has world-class education, a vibrant nightlife, and a plethora of options. UCLan is one of the top 4% of all universities in the globe, with a thriving student body of over 32,000 students. They're also investing heavily in your education and future! They are spending almost £200 million on 'The Campus Masterplan,' which includes new buildings, including a £30 million state-of-the-art Engineering Innovation Centre. Finding student flats in Preston located within the vicinity of these universities as well as the major attractions is a simple and hassle-free process.

With two shopping malls and the main street packed with stores, restaurants, and cafés, your love for shopping and hunger will be satisfied in no time. Solitas, Baluga cooking, and 'We don't give a fork' are just a few of the best places to dine, with everything from pizza to a big ol' burger on the menu. There are a variety of student houses in Preston for students to choose from. And don't forget to bring your student ID while visiting top attractions which can provide excellent student discounts. Student accommodation in Preston offers fantastic options across the city for every student. 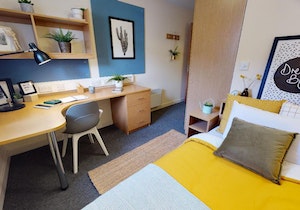 Finding suitable student accommodation in Preston may appear to be a complex endeavour, but it is not. The majority of student houses in Preston are located near notable universities such as the University of Central Lancashire, Preston College, and others. Preston has it all, whether you're seeking upscale premium accommodation or studio flats. You can either opt for the university halls of residence or choose to stay at the private accommodation in Preston. While on-campus accommodation may seem convenient initially when it comes to the proximity of the university, off-campus accommodation is less expensive, and student-friendly wherein you have the flexibility to select your room types & opt for the facilities & amenities provided. UniAcco provides some of the finest student halls in Preston, with the majority of them being within walking distance of the universities and providing adequate facilities for students.

Preston welcomes approximately 80,000 students each year, opening doors to a range of fun-filled activities and things to do. The city has relatively warm summers, with temperatures reaching 19° in July, and the coldest month, January, with temperatures dropping to 7°. The city provides students with both worlds - the tranquil life of a town on the outskirts combined with the excitement of living at a student accommodation in Preston located at the heart of the metropolis.

Preston is home to the Institution of Central Lancashire, the country's sixth-largest university. The Harris Institute and, more recently, Lancashire Polytechnic were previous names for the University. "UCLan" boasts about 33,000 students and world-class educational facilities. This city also features a lot of job opportunities. Preston was rated the best city in the northwest of England to live and work in, in 2016.

With so many alternatives, deciding where to stay in Preston could be tricky. The most difficult decision for students is whether to live on-campus or off-campus. The downside of on-campus housing is that it may be expensive, and room availability can be a concern. They are, nevertheless, near campus. Off-campus housing, on the other hand, is less expensive and provides students with more facilities and amenities than on-campus accommodation. Furthermore, students may discover off-campus housing options in Preston that are within walking distance of the universities. UniAcco offers some of the most popular, yet economical student accommodations in Preston. Furthermore, these student flats are near the city centre and well-known landmarks such as Hoghton Tower, Preston Railway Station, and Preston Cenotaph.

Best Places To Stay In Preston

Preston is one of the friendliest towns in Lancashire. If you're new to the neighbourhood, it's a great location to further your education. Students who spend enough time here will definitely create lifelong friendships. Among the most desired areas are Ashton, Lea, Ribbleton, Broadgate, City Centre, and Frenchwood.

UniAcco offers a variety of student flats in Preston in the aforementioned locations and beyond. At UniAcco, accommodation in Preston provides students with a choice of accommodation options and facilities. You can find fully furnished en-suite rooms and studio spaces. Furthermore, there are other shared amenities such as bike storage, a study space, a lounge area, a garden, possessions insurance, social events, and more. Students have access to on-site personnel 24/7. In addition, students benefit from all-inclusive electricity costs and CCTV surveillance.

Cost of Living in Preston

Preston provides students with the luxury of having the best of both worlds: central city life and beautiful suburbs to live in. Whether you choose student accommodation in Preston located right near the city centre, or near the suburbs, we have a rough estimate of the cost of living in the city. The following is a breakdown of the total monthly cost of living in Preston -

Preston, as a city, is strategically connected to every major transit system, which is conveniently accessible and within walking distance of any university in the city. Most Students in Preston have access to a variety of transportation options, including the world-famous Preston train station, buses, and friendly cabs.

Ferries - Preston's Port serves as a link between Preston and adjacent regions such as Kendal in Cumbria and many more. As a result, Preston is one of the most well-equipped locations for budget-friendly travel.

Bus - Preston's bus network operates 24 hours a day, seven days a week, with over 100 buses operating up and down the city. Students may catch buses from the major bus station near the City Centre, which connects to all of England's national roads.

Cycling - Cycling is another way to get to the city. You may tour Preston's elite districts, such as the well-known Avenham Park.

Most of the student halls in Preston are within walking distance of the Preston City Centre, Preston Railway Terminal, and the major bus terminal. Universities work with local transportation providers to save money on travel for university personnel and students.

If you have some spare time or are simply looking for new places to visit in and around Preston, have a look at the list below.

Harris Museum and Art Gallery is housed in a beautiful Neoclassical hall that was built in 1893. The first thing you'll notice as you walk in is a Foucault Pendulum displaying the spinning of the earth, as well as a functional clock. This museum houses incredible collections of natural history, costumes, textiles, pottery, and other beautiful items.

Preston's Grade I-listed gothic revival Church of St Walburge was erected by Joseph Hansom in the mid-nineteenth century. This church is famous for having the highest spire of any parish church in the country, standing at 94 metres. The Church of St Walburge is not just Preston's most prominent landmark, but also one of the highest structures of any sort in northwest of England.

Winckley Square is one of Preston's most beautiful areas. At the turn of the nineteenth century, it was designed as a residential neighbourhood for the city's upper crust. Winckley Square is located in the centre of a conservation area and is surrounded by long terraces of Georgian townhouses, which are especially impressive on the north and west borders.

Preston North End Football Club was founded in 1880 and was one of the first 12 clubs to join the Football League, which began to play in 1888-89. Preston North End won the League and the FA Cup in 1888-89, the club's most successful season to date. The Lilywhites, as they are frequently referred to, play in the 23,404-capacity Deepdale Stadium in the city's northwestern outskirts.

What different accommodation types are available for students in Preston?

Can I get a furnished student room in Preston?

Can I get discounts for student accommodation in Preston?