47 places to stay
Sort by:
Relevance

Nottingham is an excellent destination for students to reside, hosting two renowned universities: the University of Nottingham and Nottingham Trent. With over 50,000 students residing in Nottingham, the city has one of the highest student populations in the UK with different types of student houses in Nottingham. There are several events and attractions dedicated to meeting the requirements of students, including a vibrant nightlife scene.

There are also a number of ethnic activities, museums, and parks for students to enjoy, as well as a great Christmas market in the city centre and a variety of restaurants and pubs. Nottingham offers strong connections to the rest of the UK, which is convenient for many students living at private student accommodation in Nottingham.

You can pick from a variety of student homes, Nottingham student flats, short-stay accommodation, private halls, ensuites, and student rooms in Nottingham. You'll have access to a wide range of world-class amenities as well as community facilities, such as free parking, on-site gym facilities, an outdoor courtyard, laundry facilities, 24/7 security, and more. 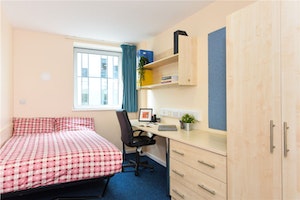 Nottingham is a popular destination to study since it is a compact, student-friendly city with two highly ranked institutions. The city boasts around 20,000 student rooms and apartments, many of which have an array of facilities and are completely equipped. The city has everything, from magnificent student accommodation in Nottingham City Centre to budget-friendly student living in Beeston. Most of the freshers who are from overseas prefer student rooms in Nottingham that are located within easy from their universities and can either opt for the university’s halls of residence or private housing, based on their convenience and budget.

Nottingham is one of the most dynamic cities in the UK, owing to its enormous student population. As per the QS Best Student Cities 2022, Nottingham is the ninth-best student city in the UK and the 53rd best in the world. Nottingham receives around 30,000 foreign students each year, making it one of England's most popular global education destinations. Some of the popular universities in this city include the University of Nottingham, University Park Campus, and Nottingham Trent University, all of which hold great value with global standards.

Students can also enjoy a variety of cultural activities, museums, and parks, as well as a fantastic Christmas market in the city centre and a diverse selection of restaurants and pubs. Nottingham has strong connections to the rest of the UK, and it is a great location for many residing in the student houses in Nottingham.

Freshers from overseas are required to choose between on-campus and off-campus living. While university-owned student residences offer the advantage of being close to campus, they are sometimes more expensive and less flexible, and their availability cannot be guaranteed. Private student accommodation in Nottingham comprises elegant yet affordable en-suites, studios, and communal flats that include all costs.

Best Places to Stay in Nottingham

Nottingham is a thriving city with a diverse selection of housing options for students. Because of the city's numerous reputable institutions, there are many student-friendly locations with easy access to transportation networks, shopping, restaurants, and hospitals. The City Centre, Beeston, Wollaton, and The Park are a few of the most sought-after areas in the city with easy access to everything a student requires. UniAcco lists various low-cost student lettings in Nottingham in the aforementioned areas and beyond. They are as follows:

Nottingham Two: This residence is undoubtedly among the best student accommodation in Nottingham Trent, located in the most popular residential zone. It is only minutes away from both, Nottingham Trent University as well as the University of Nottingham. It provides a range of en-suite rooms, studio rooms and apartments.

Bowman House: Bowman House offers a variety of room options, including en-suite rooms, studios, private apartments, and more. Each residence is equipped with a variety of facilities to help students feel at ease. It is well connected to public transportation and is close to the universities of Nottingham.

Nottingham Square: This student accommodation in Nottingham provides trendy en-suite rooms in shared apartments and studios. Students can walk a short distance to the city centre, which is bordered with a variety of stores, restaurants, cafés, and other establishments.

Cost of Living in Nottingham

As per a recent study by TotallyMoney, Nottingham is the 2nd cheapest city in the UK for living costs of students. The cost of living in the city is quite close to the UK national average. This table provides an estimate of a student's living expenses in Nottingham -

Nottingham is one of the greatest cities for students, with a plethora of exciting activities and attractions. It has strong connections to the rest of the UK, and for many students who live there, including a huge number of overseas students, it is a perfect location that is neither too little nor too huge as a city for them to enjoy. Commuting in Nottingham is simple, especially for students who prefer public transportation such as buses, trams, trains, ferries, and bicycles.

Bus: Hundreds of local bus stops can be found in every area of Nottingham, catering to both local and national commuters. The majority of student accommodation in Nottingham has strong bus connections, making it easy for students to get to and from the university.

Trams: The recent reintroduction of tram trains in the city has made students’ lives easier, with a faster, yet economical edge to it.

Ferries: The all-famous Nottingham port ferries allow local travellers to commute in and out of the city vua the British Waterways.

Cycling: Nottingham features dedicated cycling routes and areas, as well as bicycling facilities for students. Students save time, energy, and money as a result of this.

Nottingham is recognised for its bustling marketplaces and robust business culture. In the city, residents will discover a mix of high-end shopping and artwork by local artists and entrepreneurs. You'll discover a diverse range of unique boutiques providing clothing, gastronomy, books, presents, artworks, garden equipment, home products, jewellery, and much more. Nottingham’s heavy student population gives the city a young and energetic vibe. The city lights of the streets will always urge you to step out of your student accommodation in Nottingham and try something new. Here are some of the best places to visit at Nottingham -

Wollaton Hall - Wollaton Hall, built in the 1580s, is a superb Tudor mansion. This monument is situated on 500 acres of deer-infested parkland. The Industrial Museum is housed in the stables and outbuildings. Wollaton Hall, with its exquisite Elizabethan-style mouldings, is a must-see for students.

Old Market Square - With a total area of 5.5 acres, this is the UK's largest market square. It is a prominent gathering spot in the city. The Old Market Square served as a crossroads between the Norman colony of Nottingham and the earlier Anglo-Saxon town in the Middle Ages. It is now the location where Nottingham residents come on New Year's Eve for a German-style "Weihnachtsmarkt" and fair in December.

What different accommodation types are available for students in Nottingham?

Can I get a furnished student room in Nottingham?

Can I get discounts for student accommodation in Nottingham?