337 places to stay
Sort by:
Relevance

With 23 major institutions and over 350,000 students, London is a global centre of excellence for education. It's easy to see why London is a favourite location for international students from all over the globe. It's a big capital of culture, historic sites, and music. From Kensington & Chelsea's open parks and charming pubs to Shoreditch's creative sanctuary, students may explore the city's network of neighbourhoods, each with its own distinct flavour.

If your student accommodation in London is not near to your university, there are several alternatives to move around. The most well-known mode of transportation in London is, of course, the Tube (or underground), where you can simply use your Oyster card to move around. Students can also make use of the bus service to commute from their student housing in London to the city's major attractions.

Student living in London provides everything a student requires; no matter where you reside, you will experience the greatest of the city. Camden, Bloomsbury, Brixton, Waterloo, Westminster, Mayfair, Kensington, and other areas are popular, economical, and culturally varied. Here you can find some of the best student accommodation in London, equipped with first-rate facilities and community amenities. 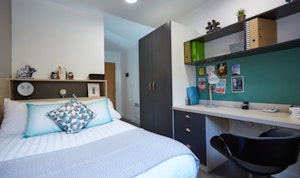 Discover the best and most affordable student accommodation in London with the most advanced amenities. Finding the right student accommodation with comfort and reasonability can be difficult. With UniAcco, you will not have to worry about compromising on quality because our student housing in London will have all the features. All the student flats in London are close to the best and most popular universities like the University of London, University College London, King’s College London, Imperial College, LSE, and more.

Of the hundreds of properties that are listed on our website, all the student housing comes filled with top-class amenities that come at a very reasonable price. Student accommodation in London is further divided into shared apartments, student halls, private apartments with single & dual occupancy, and studio apartments.

Private student accommodation in London is the one that is most preferred by students that choose to study in this city. These are houses that are budget-friendly and yet luxurious with en-suites, apartments with top amenities and also all-inclusive utility bills. Student housing in London usually ranges between GBP 110-145/per week. The reason why students choose to stay at these apartments is because of the freedom, proximity, affordability, and location it comes with. You can even look for short term tenancy based on your preference in these student flats in London.

London is the largest and most famous city in England. This capital of England has an ancient core and is now the financial centre of the country. Founded by Romans, the city boasts settlement for two millennia now. London stands tall and strong on the River Thames & it is located in the South-Eastern part of England. Being a metropolitan city with a strong economic sector, the city is a hot spot for students and workers from all around the world. The city is not just well with its financials and infrastructure, it is also a place that connects all the major cities that are nearby such as Birmingham, Coventry, & Leicester.

The city has a diverse culture where people from almost everywhere in the world are settled here and you will come across 300 languages that are spoken in London. There are ample opportunities in London, you will find some of the most well-known world-renowned institutes here. This is why students choose to stay and study in London because of the research-backed universities with striking architecture. Apart from that, there are some of the finest world heritage sites here such as the Tower of London, London Eye, Buckingham Palace, Trafalgar Square, Piccadilly Circus and more.

Every year the city hosts more than 110,000 international students, making it a prime place to study abroad. It is the most liked abroad destination and hence finding student accommodation in London can be easier.

As mentioned above, London is indeed a hotspot for international as well as EU students because of its strong educational institutes and the opportunities present in this city. Finding student accommodation in London may look tedious but it's not because almost every college and university has multiple student housing options in close proximity to the institute. UniAcco helps you to choose and select the ones that really suit you and your needs.

Aaccommodations in London is full of all the decent facilities such as fully-furnished homes that come with a kitchenette, study area, lounge spaces, gaming area, free wi-fi, 24-hour staff support, and so much more. You will not be disappointed with the number of amenities you will have. Compare multiple housing options through UniAcco and choose the ones that best suit your needs.

Best Places to Stay in London

There are so many places to explore and stay in London. We have listed down some of the best places to stay in London for students who choose this city as their study abroad destination.

Covent Garden: Covent Garden is the ideal place for student accommodation London, especially if you're a first-time visitor. It is home to many of London's attractions, as well as a plethora of stylish bars and restaurants, and is conveniently located near other London hotspots such as Westminster, Soho, Trafalgar Square, and Piccadilly Circus. Property in Covent Garden is slightly expensive, but it is perfectly positioned for travelling around and close to the major attractions.

Westminster: If you are wondering which place is a great choice for students to stay in London then we would suggest Westminster. The Houses of Parliament, Trafalgar Square, Westminster Abbey, and the National Galleries are among the many attractions in Westminster, which stretches back from the River Thames. As a result, students prefer Westminster to any other London neighbourhood. You will find many cheap student accommodations in London in this location.

Soho: Soho is the best nightlife district in London. Soho itself has a lot of clubs and late-night bars, and it's also within easy reach of some of London's liveliest clubs. In the last ten years, trendy Soho has witnessed a transformation. What was once a squalid portion of the city centre has been converted into one of the most vibrant areas. The best student accommodation in London for students who wish to enjoy London nightlife with their academics.

Kensington: Because of the number of free museums within walking distance and the slightly slower pace, Kensington is the greatest place in London to stay for students who prefer it quiet and easy. It is also easier to find student flats in London in this area. Although it is pricey, there are numerous benefits. It's also simple to travel into the city centre by taking the subway or bus.

Cost of Living in London

If you want to reside in private student accommodation in London, it is recommended that you budget £1,100 - £1,300 per month for all living expenditures, including lodging, travel, food, laundry, study fees, and other personal expenses. To be safe, you should conduct your study because this differs based on your lifestyle.

In general, England's transportation system has the potential to be one of the most efficient in the world. London, on the other hand, is intelligently connected to every major transportation system and is easily accessible from any institution. Students can discover a variety of transportation options in London, including the world-famous London Underground Tube, DLR (machine-driven light railway), trams, and buses.

To assist you, we've included the major London transportation systems along with their average fares. Students should be aware that these fares may fluctuate depending on the time of day.

Train: London has its own sole metro rail system that is well connected to almost every nearby hotspot. From Zone 1 to Zone 6, it covers all the prime areas including London City Centres.

Bus: London has a bus network that runs 24 hours a day and if you are a student that is running tight on your budget then this is a great transportation option for you. Each ride on the bus costs around GBP 1.55/per day.

Cycling: The local parts of the city are all great options to be seen by cycling around and London even has some great exclusive cycling areas like Jubilee Park & Garden.

This mesmerizing city has a lot to offer. There are some of the best Architectural marbles to be seen and great historic monuments with award-winning theatres and of course, high-end streets and shops. Below are some of the best and most renowned attractions mentioned which you can explore and have a good time while your stay in this city.

Didn’t we all spend our childhood watching the great Harry Potter movies? Well, now it's time to watch it in person by visiting the Warner Bros. Studio in London. Explore the sets, costumes, and props featured in all seven Harry Potter films, as well as the Great Hall, Dumbledore's office, and Hagrid's hut. It's the complete Harry Potter adventure!

Climb aboard one of the London Eye's 32 glass capsules for stunning views of the city's most famous attractions. As the capsule slowly revolves over the Thames, take in the magnificent 360-degree panoramas.

The London Transport Museum presents exhibits that link transportation to London's social and cultural history. More than 80 vehicles from London's heritage, along with a red Routemaster bus and the world's largest first Underground steam train, are on display inside. There are also some fantastic posters and artwork!

The Emirates Air Line cable car, which affords breathtaking views of the city and departs every 30 seconds from the Greenwich Peninsula and the Royal Docks, takes you high above the Thames. On a five to ten minute flight, depending on the time of day, see the wonders of day or admire the city as it twinkles at night.