Bradford is one of the major cities in the United Kingdom, located on the eastern foothills of the Pennines. With a population of almost 500,000 people, it is a metropolitan borough in West Yorkshire, England. Bradford, after Leeds and Sheffield, is the third-largest city in Yorkshire and the Humber, and the seventh-largest in the United Kingdom. Hence, it attracts quite a decent amount of international students and; student accommodation in Bradford can be easily found.

The city has made numerous contributions to the film industry, and UNESCO designated it as the world's first City of Film (The United Nations Educational, Scientific and Cultural Organization). It's a fascinating spot to call home, only 45 minutes from Leeds and an hour from Manchester. Private student accommodation is located in near proximity to all the attractions so that it is easy for the students to go around in their free time. You will find top student apartments in Bradford as per your needs and preferences. UniAcco is one such place that assists students to find their desired accommodation near their favourite universities. 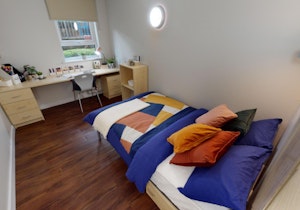 Bradford University is located in the centre of Bradford, England. As a result, locating student housing near the University of Bradford will be simple. Hundreds of thousands of students go to this lovely metropolis to pursue their ambitions and become successful. While there is a variety of student accommodation in Bradford in the city, some of the most popular housing types include budget-friendly halls of residence, studios, student dorms, shared rooms, and economical private houses (PBSA).

Choosing a student accommodation in Bradford to stay for newcomers may be simply because the college provides accommodation for all first-year undergrad students. The University of Bradford offers a variety of famous living options, ranging from inexpensive apartments near Bradford City Centre to undergraduate halls near Queensbury that provide unique rooms and basic facilities to enrolled students. These locations are substantially closer to the universities and have lower maintenance costs, making them harder to fill.

Bradford is the sixth-largest city in the United Kingdom, with a dynamic, young multi-cultural population. Since the beginning of the industrial revolution, the city has been regarded as a global leader in the invention. Set in beautiful Yorkshire countryside, the old international centre for the wool industry has some of the UK's best Victorian architecture as well as the World Heritage Site of Saltaire and Haworth, the home of the Bronte sisters.

It is now just two hours by rail from London, 20 minutes from Leeds, and a short drive from Salford Media City, which is home to prominent national broadcasters. Visitors from all around the globe arrive at the newly enlarged Leeds-Bradford International airport. For more than a century, the city's outstanding architecture and environmental legacy have made it a favourite site for filming.

Universities provide outstanding amenities that are used by both domestic and foreign students. Bradford’s universities, with their wide halls, also provide superb accommodation. There is also sufficient provision for students who choose private student accommodation in Bradford. Off-campus, there's plenty for students to do, with fantastic nightlife options such as clubs and restaurants, and for those who want to explore a little further. Here you will discover information on UniAcco's private student accommodation in Bradford, including student houses in Bradford and much more.

Best Places to Stay in Bradford

UniAcco offers many options for student accommodation in Bradford. The locations of these private student housing in Bradford are very affordable and are located close to your university.

Cost of Living in Bradford

If you wish to use public transportation around your student accommodation in Bradford, below are some of the options you could use:

The Bradford Industrial Museum is an excellent site to begin your visit to Bradford. This museum focuses on local industrial history, including Bradford's role in the Industrial Revolution. Bradford was well-known for its textile sector, which included the production of wool. The museum is housed within an old textile plant and exhibits technology from the peak of Bradford's output.

The National Media Museum is a refuge for fans of pop culture and anyone interested in the massive volumes of media we consume on a daily basis. Television, animation, photography, video games, cinema, radio, and the Internet are all included in exhibits of the museum. It has one of the most extensive collections of media objects in the world, with about 3,500,000 items.

Lister Park is one of the largest and most popular public parks in Bradford. The view is stunning, and it's a great place to unwind on a sunny day. There are several flower gardens to visit and enjoy, particularly in the spring and summer. There is also a boating lake, tennis and basketball facilities, and a playground for youngsters. The Mughal Water Garden is one of the park's features.

The Bronte Parsonage Museum is a must-see for literature fans and is managed by the Bronte Society in honour of the three renowned Bronte Sisters: Charlotte, Emily, and Anne. Jane Eyre, Wuthering Heights, and Agnes Grey were all written by these sisters. The museum, which is housed in their old home in Haworth, near Bradford, is popular among readers who want to learn more about the sisters and the surrounding environment that inspired them.